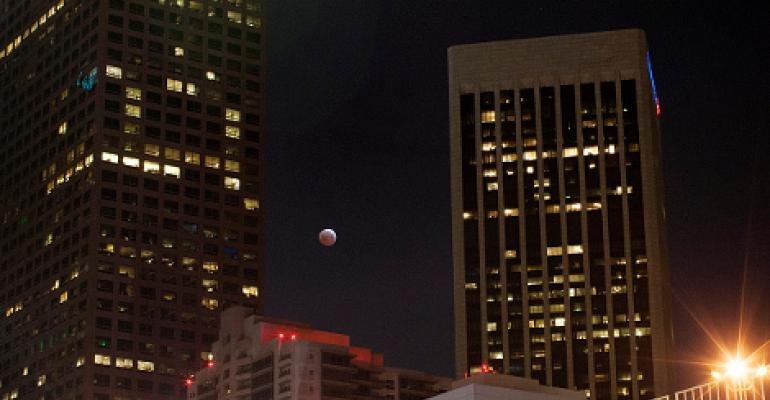 The moon is seen behind downtown high-rise buildings during the shortest total lunar eclipse of the century before dawn on April 3, 2014 in Los Angeles, California. (Photo by David McNew/Getty Images)
Manage>Uptime

Updated with information about Level 3 service disruption to data center customers, including Internap and Equinix (within the same building), and with a statement from CoreSite.

Call this August the month of explosion-related data center outages.

At least one data center has experienced disruptions following an explosion in a basement of a high-rise in downtown Los Angeles Thursday evening.

While the cause of the explosion is still being investigated, the Los Angeles Fire Department suspects it had something to do with a generator in the basement. The blast at 811 West Wilshire Blvd. took out an on-site power station, leaving 12 buildings in the area without electricity, according to the local utility.

The explosion interrupted connectivity on network infrastructure operated by Level 3 Communications, which serves a lot of data center users in the area, Craig VerColen, a spokesman for LogMeIn, a company whose data center went dark as a result of the incident, said via email. Level 3 issued a statement saying its technicians were working to restore services.

"The Level 3 network is currently experiencing a service disruption due to a commercial power outage in Los Angeles," the statement read. "Ensuring the stability of our network is our primary concern, and we are dedicated to minimizing customer impact during an outage."

LogMeIn uses data center services by Internap, which in turn uses an Equinix facility downtown, VerColen said. The Equinix data center is one block away from the site of the explosion. The data center "never lost power," he said.

Other Internap or Equinix customers in the facility were also affected by the incident, VerColen said.

Equinix and Internap representatives did not respond to requests for comment in time for publication. We'll update the post once we hear from them.

The incident also affected One Wilshire, one of the most important carrier hotels and data center hubs on the West Coast.

One of the data center operators at One Wilshire is CoreSite. In a statement, the company's senior VP of operations Dominic Tobin said the facility failed over to generator power without experiencing a data center outage.

LogMeIn, whose data center went offline as a result of connectivity loss, is a Boston-based Software-as-a-Service company that provides remote connectivity for collaboration, IT management, and customer engagement.

"In this area was Level 3, and Level 3 provides a lot of the fiber and connections for many ISPs," VerColen said. "They were the ones most impacted by the explosion, so it was really the connections between things in the cloud to our data center that were interrupted."

LogMeIn first tweeted about the outage early Friday morning PDT. In an update about one hour later, the company tweeted that full connectivity was restored.

We're experiencing some disruptions due to a data center outage -- actively rolling over to other data centers.Apologies to those impacted

While the company's systems failed over to other data centers (it has nine sites total), various aspects of the service were interrupted for about two yours, VerColen said. "Given the time of day, it impacted mostly UK or European customers."

Two people were hospitalized with minor health issues following the explosion, according to the fire department.

The blast also briefly interrupted a Shania Twain concert that was taking place in the nearby Staples Center.

Another much bigger explosion caused some prolonged data center downtime in Tianjin, China, where a warehouse complex used by a chemicals transportation company erupted multiple times and killed more than 100 people last week.

Data center operators at the nearby National Supercomputing Center shut down the government’s Tianhe-1 supercomputer as a precautionary measure following the blast. China’s official government media reported earlier this week that the supercomputer had been brought back online.