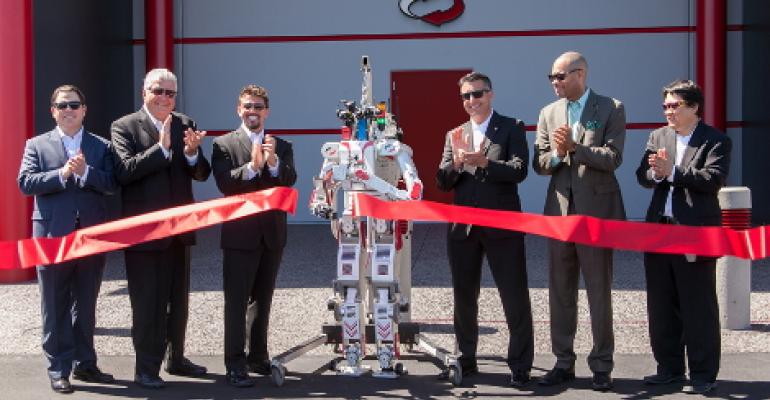 After driving a vehicle, climbing stairs, turning valves, using power tools, and navigating around debris without human assistance in the DARPA robotics challenge finals this past June, cutting a ribbon at a data center opening was probably peanuts for Metal Rebel, the human robot from the University of Las Vegas who took eighth place in the finals, competing with robots by MIT, NASA, and Lockheed Martin, among others.

Metal Rebel was on hand earlier this month to cut the ribbon at the opening of the latest massive Las Vegas data center by Switch, whose data center cluster in Sin City has now reached 215 MW in critical power capacity. The ceremony was more pleasure than business for the robot, where it got to rub shoulders with Nevada Governor Brian Sandoval and state senators Michael Roberson and Aaron Ford, who were all present at the event.

Switch is the dominant data center service provider in Las Vegas, known for the huge scale of its facilities, their sleek futuristic interiors, and ex-military armed guards. The company is currently also building a huge $1 billion campus in Reno, Nevada, near the Apple data center campus, where eBay has signed as the anchor tenant. 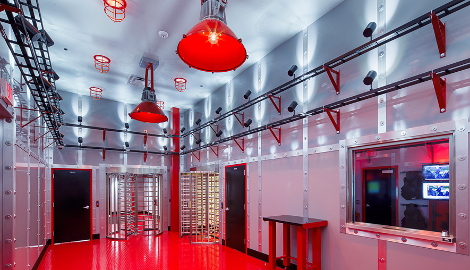 Switch provides retail colocation from as little as half a cabinet to as much as 1,000 cabinets per customer, such as its recent deal with Shutterfly. Its competitors in the Las Vegas data center market include ViaWest, Cobalt, and zColo, among others.

SuperNAP 9 is about 500,000 square feet total, and Switch said it will ultimately support up to 50 MVA of power. Subsequent phases will be of similar size to the first one. Kramer said 20 percent of phase two has been pre-leased.

And now on to the important stuff, which is a rather anticlimactic video of a robot cutting a ribbon: