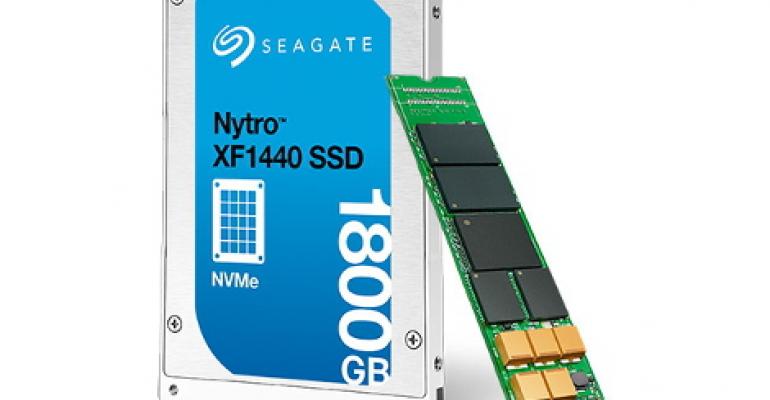 Looking to give IT organizations two paths to accessing high performance solid-state drives, Seagate today at the Flash Memory Summit announced SSD offerings that plug into an NVMe interface as well as a PCIe Flash Accelerator Card.

Based on technologies Seagate acquired from LSI Technologies, Kent Smith, senior director of product marketing for Seagate Flash, said that as part of an effort to expand Seagate’s presence in high performance computing environments the long-time manufacturer of magnetic storage devices is increasing its investments in developing products based on non-volatile Flash memory technologies.

The advantage that SSDs bring in the HPC storage context is that they don’t require developers to work as closely with storage architects to optimize performance by making sure that particular sets of data are laid down in a precise manner on an HDD.

The 2.5-in. Seagate Nytro XF1440 provides access to 1.8TB of storage and M.2 XM1440 SSDs provides 960GB of storage at throughput rates of up to 20GB per second through the NMVe interface. In terms of power consumption, that equates to 25,000 IOPs per watt, according to Seagate.

“Both these offering are latency-optimized for the HPC segment,” said Smith. “They also draw half the power of other Flash storage systems for about one quarter of the price.”

Of course, the ability to use those SSDs depends on whether or not an IT organization has acquired relatively new servers that support the NVMe interface.

For those organizations looking for a more traditional way to connect to PCIe, Seagate is also making available its Nytro XP6500 as a PCIe flash accelerator card to access 4TB of raw capacity via a card that sports 4GB of on-board memory.

While Seagate is investing more in non-volatile forms of memory for primary storage, Smith said, the company is not moving away from traditional hard disk drives any time soon. It still produces over one million hard drives a day that get used within everything from consumer devices to enterprise-class storage system.

More IT organizations may be using SSDs for primary storage, but the price differential between SSD and HDD on a per-gigabyte basis means HDDs will continue to be used for primary, secondary, and tertiary storage for some time to come, Smith said.

While SSDs will clearly be playing a much bigger role in both HPC and traditional enterprise IT environments in the months and years ahead, most IT environments will be managing hybrid storage systems based on a mix of SSDs and HDDs for years to come.