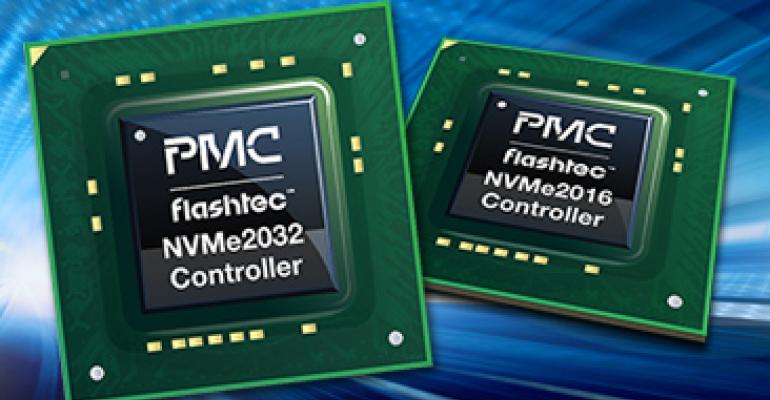 At the Flash Memory Summit today PMC-Sierra unveiled a set of PCI Express storage switches and solid-state drive controllers that can drive one million IOPs across up to 20TB of shared server Flash capacity.

“These offerings are optimized to scale for Flash using a flexible, programmable model,” said Peene. “We can put anywhere from eight to 20 TB on a single controller.”

PMC-Sierra claimed the controllers make use of DDR4 DRAM to deliver ten times the performance and capacity of SATA SSDs and nearly double the IOPS of other SSDs connected to a PCIe bus. The controllers via a Toggle or ONFI interface can support 3-D, TLC, enterprise MLC, MLC, and SLC NAND Flash storage devices across as many as 32 independent Flash channels.

The new storage switches, meanwhile, provide a way to reliably pool a large number of PCIe drives in a way that PMC-Sierra claims is up to 60 percent more efficient that other PCIe switches, which according to the company translates into a savings of 1,000 watts per rack.

The switches come with a number of diagnostic and debug features that can be used to pinpoint and resolve downtime and performance issues quickly. All told, PMC-Sierra said the PSX uses 75 percent fewer devices than standard switches in a typical Flash array, allowing system designers to increase Flash density, lower the bill of materials costs, and improve mean time before failure.

Specifically, the PSX family comprises switches from 24 lanes to 96 lanes per port, all of which, Peene said, makes it simpler to scale out Flash storage inside the data center.

As IT organizations increasingly view Flash storage as a way to reduce both the physical size of the data center and the amount of energy consumed by it, there is a shift underway toward using more SSDs for both caching and primary storage. Less clear is to what degree SSDs will supplant traditional hard disk drives.

While SSDs provide much higher levels of performance, the cost differential between SSDs and HDDs on a cost-per-gigabyte basis is still a significant issue. As a result, most IT organizations are not replacing HDDs with SSDs all across the data center just yet. But for applications where performance requirement dictate, SSDs are rapidly becoming the new default for primary storage.