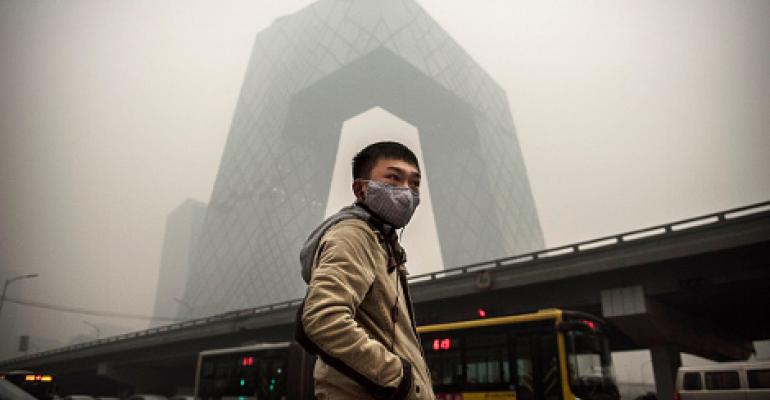 A Chinese man wears a mask as he waits to cross the road near the CCTV building during heavy smog on November 29, 2014 in Beijing. (Photo by Kevin Frayer/Getty Images)
Business

China’s notoriously high air pollution levels are a well-documented public-health issue. But pollution also has other less talked about effects. One of them is on the efficiency of data centers in the country.

Pulling outside air into a data center to cool equipment to reduce energy used by mechanical cooling systems has been one of the most effective ways to increase the facility’s energy efficiency. The high concentration of pollutants in the atmosphere, however, makes “free cooling” in China data centers not as easily obtainable as it is in the US, for example, where the use of outside air to supplement data center cooling capacity is commonplace.

Air pollution in China has resulted in higher IT equipment failure rates for Baidu, the internet giant that’s the country’s answer to Google. The problem of pollution has driven a lot of research and development focus on data center cooling technologies at the company. Those research efforts take place both in China and in Baidu’s Silicon Valley offices, Ali Heydari, the company’s chief architect, said.

Heydari talked about the challenges of operating data centers in China at the DCD Internet conference in San Francisco Friday.

The highest concentrations of air pollutants are found in the eastern portion of China. “Most of our data centers are actually located in this area,” Heydari said. “That’s a major challenge for us.” Baidu has three data centers in Beijing, whose smoggy images have become emblematic of China’s pollution problem, and one in Shanxi, a province just west of the capital.

The pollutants include sulphur dioxide, nitrogen oxide, and PM 2.5, which is shorthand for fine particulate matter. PM 2.5, generated by vehicle exhaust, coal power plants, or fires, is what creates the visible haze in polluted cities and causes many of the human health problems associated with air pollution. Concentration of PM 2.5 is a common air quality metric.

The US Environmental Protection Agency uses an Air Quality Index system, where quality ranges from 0 (cleanest) to 500. The AQI for PM 2.5 in Beijing on early Saturday morning local time was over 150, which the EPA considers “unhealthy.” Around the same time, the AQI for PM 2.5 in Ashburn, Virginia, which has one of the biggest concentrations of data centers in the US, was about 30, considered “good.”

The Chinese government recently claimed major improvements in air quality in Beijing, reportedly due to environmental policies of the last year, but problems persist, causing issues for data center operators.

One of the technological solutions his team has been looking into is air scrubbing. They have been testing a variety of scrubbing methods, such as water or chemical spraying or filtration. The idea is to integrate a scrubbing mechanism into the free cooling system. The liquid spraying approach is effective but requires a lot of dehumidification.

They have also created cooling designs that don’t rely on outside air but increase efficiency otherwise. One such design that is showing a lot of promise is a “bottom cooling unit.” Essentially, instead of a centralized chiller plant, the heat-exchanger coils are placed directly underneath the IT racks. The racks themselves have enclosures around them, and cold air is pushed into the enclosures, ensuring that all cold air that’s created makes it to the hardware.

“It’s basically a self-contained data center,” Heydari said about the enclosure. “It has its own cold aisle; it has its own hot aisle.” The bottom cooling units don’t require a raised floor, however, they are most efficient when installed in a raised-floor environment.

The system automatically adjusts cooling capacity based on the hardware density installed in the rack. Because cold-air supply is localized, it is more efficient and eliminates the risk of widespread cooling failure. It is a liquid-cooling solution, but because the actual heat exchanger is under the rack, there’s no danger of damage to IT equipment by a water leak.

Like its web-scale peers in the US, Baidu spends a lot of resources on R&D to increase the efficiency of its hardware and data centers. The company has been involved in Facebook’s Open Compute Project and has designed its own servers and data center racks that use some OCP design elements.

Heydari, who in the past has worked as a senior hardware engineer at Facebook and Twitter, says Baidu’s Scorpio server designs are more energy efficient and yield higher power densities than OCP designs. The designs aren’t Baidu’s alone. Project Scorpio was started by a group of China’s largest data center operators, which also included Tencent, Alibaba, and China Telecom.

Baidu is also an early adopter of servers powered by ARM processors, the low-power alternative to Intel’s x86 architecture, FPGAs (field-programmable gate arrays), and GPU accelerators, according to Heydari.

Like other web-scale data center operators, Baidu has had to innovate out of necessity since typical hardware vendors have not traditionally designed equipment for infrastructure of such scale. In China, air quality happened to create the necessity to think differently about data center cooling.

This and other challenges in that market – some of the other major challenges there are high energy costs and relatively low rack power densities in colocation facilities – are important to address, since much of the growth in the data center sector in the coming years is going to occur in China, one of the world’s fastest-growing cloud services markets.