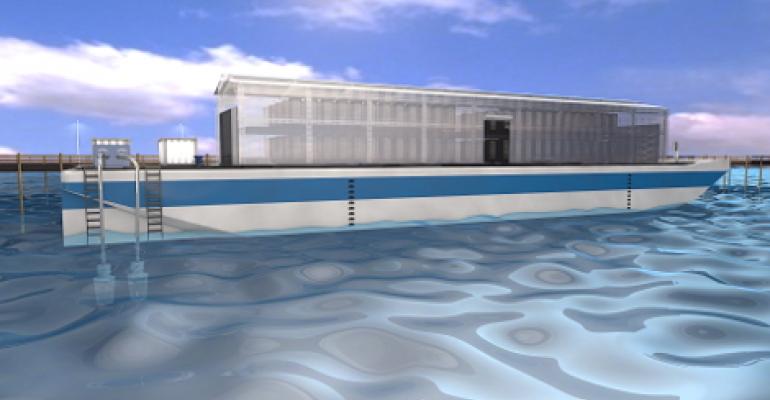 Take all the mechanical and electrical infrastructure necessary to support 8 MW of critical load, add the IT load itself, and put everything on a floating barge. What could go wrong?

According to two San Francisco Bay Area entrepreneurs, not much. In fact, Arnold Magcale and Daniel Kekai believe a floating data center can be safer and, importantly, cheaper to own and operate. They believe it so much that they are building one at a dock on a US Navy shipyard about 20 miles northeast of San Francisco.

Unlike Google’s tide-powered floating data center idea – which as far as we know is just a patent – or the Google barge that used to be docked at Treasure Island on the San Francisco Bay, which turned out to have nothing to do with data centers, this floating data center project is real and is currently under construction.

Like an Equinix or a Digital Realty, the startup, called Nautilus Data Technologies, will provide data center colocation services. It plans to build multiple floating data centers in different places and offer services at competitive rates, exploiting energy efficiency of its technology, security, and low cost of aquatic real estate as its competitive advantages.

A waterborne data center, Magcale argued, is safer from fires and earthquakes than a data center on land. It can also be easily moved from one place to another in case of emergency. He is a co-founder and CEO of Nautilus.

Over the past six years the startup has been designing the facility, including its own patent-pending cooling system, which uses the water the data center is floating on. It is also building its own cloud orchestration platform and data center infrastructure management software, which the founders say will take advantage of machine learning to optimize its floating facilities for efficiency.

After a successful proof-of-concept, Nautilus is building out four 2 MW data halls on a 250-foot barge docked at Mare Island, a peninsula that’s part of the City of Vallejo and home to the Mare Island Naval Shipyard. Being at a military base adds to the security element of the project, and the founders hope to build the other data centers in military locations as well. Mare Island also had lots of excess power capacity and a ship builder that fit the startup’s needs.

The current plan is to build a total of five these data vessels in various places. Each floating data center will be docked when in operation, getting power and network connectivity from land.

The company is funded by a family that invests in the green energy sector, but Magcale declined to name the investors. The first vessel is costing Nautilus about $3 million per 1 MW of capacity, he said.

Magcale has worked in data center, operations, and engineering roles since the late ‘90s. His co-founder Kekai, the company’s data center and cloud infrastructure architect, has had an internet-infrastructure career similar in length. Both founders have worked at Exodus Communications, one of Silicon Valley’s first colocation giants that went bankrupt during the dot-com bust. The two have been colleagues at Microsoft, Motorola, and Quantum Capital Fund.

They hope they can convince retail colocation and wholesale data center customers that the highly unorthodox solution can be more advantageous than traditional colos on land. According to the founders, one of the big advantages besides disaster avoidance is efficiency of the cooling system.

A closed cooling loop runs through each data center rack, collecting heat from the IT gear. It then passes the heat through a heat exchanger to cool ocean water, which is in turn expelled back into the ocean. The system is extremely efficient since it doesn’t require cooling towers, chillers, or air handlers and takes water directly from underneath the barge.

Another advantage is quick deployment. The Nautilus team expects to complete the 8 MW barge in six months. The founders claim they can replicate the timeline anywhere in the world.

Of course, every location will have its unique complications. In the US, for example, they had to ensure it would be permitted by the US Coast Guard and comply with environmental regulations. The thinking is if Nautilus can pull it off in California, one of the more tightly regulated states, it can do it anywhere, Magcale said.

The barge at Mare Island is only the first iteration of the concept. Kekai is already thinking about future-generation barges that will use fuel cells as a primary source of power, relying on the electrical grid for backup, he said. Together with the cloud-service provisioning system and the advanced DCIM solution Nautilus is developing, the company promises to have a fairly sophisticated, modern data center solution.

But, whether they’ll be able to make the case that a data center on water can be better than a data center on land remains to be seen. Given the notoriously conservative nature of data center users, Nautilus is facing a steep climb.