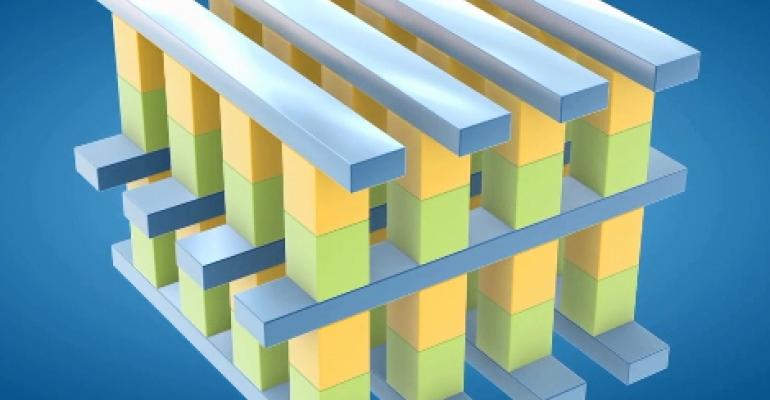 Intel and Micron announced the start of production on a new class of non-volatile memory, promising speeds up to 1,000 times faster than NAND memory. Intel says the new 3D XPoint (Cross Point) technology was developed using unique material compounds and a cross point architecture to enable not only the copious speed increase, but 1,000 times greater endurance than NAND and 10 times greater density than conventional memory.

The new chips will be produced from the Intel Micron Flash Technologies labs in Utah, a joint venture formed by the companies back in 2006. After more than a decade of research and development, Intel said the new 3D XPoint technology ushers in a new class of non-volatile memory that significantly reduces latencies, allowing much more data to be stored close to the processor and accessed at speeds previously impossible for non-volatile storage. IMFT introduced several new products, including new 3D NAND flash memory last spring.

The innovation in this technology lies in both the three-dimensional cross point architecture and using a bulk material property change instead of an electrical charge to store data, which uses the entire memory cell (enabling smaller dimensions). This transistor-less approach differs from other 3D NAND methods using a floating gate approach.

As the first new innovation since NAND flash was introduced in 1989, Intel said 3D XPoint is a fundamentally different class of memory. Senior VP and general manager of Intel's Non-Volatile Memory Solutions Group Rob Crooke said in a statement that the advancement will "enable us to scale computing even further." Intel places 3D XPoint between memory and storage. "When we scale processing performance, memory and data can scale with it," Crooke added.

"One of the most significant hurdles in modern computing is the time it takes the processor to reach data on long-term storage," said Mark Adams, president of Micron, in a statement. "This new class of non-volatile memory is a revolutionary technology that allows for quick access to enormous data sets and enables entirely new applications."

The potential applications for this new technology are vast, and both Intel and Micron say they are developing individual products based on it.