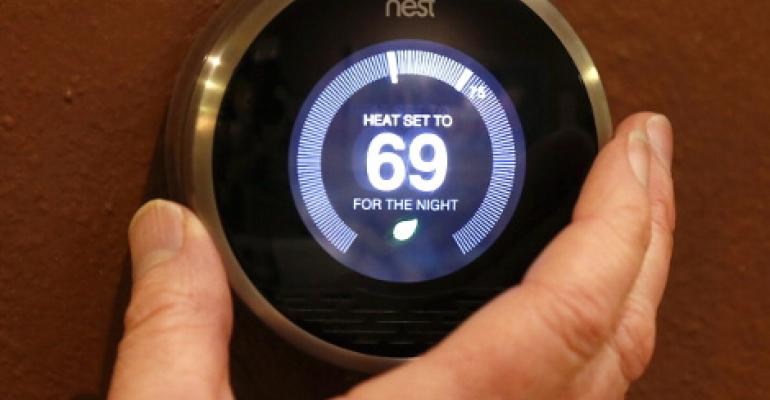 A Nest thermostat is being adjusted in a home. (Photo illustration by George Frey/Getty Images)
Business

For the Internet of Things to reach its full potential, a single communications standard is needed. A range of devices and "things" need to be able to communicate with cloud and perhaps more importantly with one another. Several early standards and frameworks have emerged in attempt to define the wider framework that will enable IoT interconnection.

The problem is consortia, foundations, and standards are multiplying. These consortia are somewhat paradoxically competing to be the most open and interoperable.

The Internet of Things requires an agreed-upon communications standard so that the information generated by devices can be shared and cross pollinated to create new and useful cross-functionality. Data isn't as useful when it exists in silos.

A single standard will enable all these devices from different manufacturers to communicate with one another, clouds and proprietary data clouds, and do it securely and privately. The Open Interconnect Consortium and AllSeen Alliance both want there to be a single standard for IoT. The problem is they don’t necessarily agree with one another and each insists that it should be the standard.

OIC and AllSeen are two of the more recently active competing standards among several. Both recently announced impressive membership gains and market traction.

Both Martz and AllSeen senior director Philip DesAutels believe that one standard will eventually emerge.

OIC, the younger of the two, has seen a hockey-stick growth curve with its membership and just released its 0.9.1 specification. The core 1.0 specification will be submitted for review at the end of August.

AllSeen’s framework is the open-source AllJoyn. “AllJoyn’s goal as a software project is to create and maintain and deliver production-ready code,” said DesAutels. “It’s a very mature framework that has been around for about five years and is in tens of millions of products.”

DesAutels added AllJoyn will likely hit a billion devices in about a week; the open source code is bundled into Windows 10.

Where AllSeen and OIC Disagree

AllSeen focuses on device-to-device and starts at the home extending outward. OIC was born out of business applicability of IoT extending into consumer.

AllSeen is different, said DesAutels, because it’s completely open and will never require a specific vendor to implement, and it focuses on product-to-product communications and doesn’t require a cloud in the middle.

Martz said the right approach is a combination of open source and industry specifications. Intel's interests in IoT standards is simply creating markets, he said.

“Open source will help speed solutions to market, while the industry specification means we can go to other standards bodies and make liaison agreements,” said Martz. “The consumer space can be quicker and looser about security, privacy, and authentication. The enterprise space needs a different approach.”

Data center service providers care about IoT because more devices mean more data, more bandwidth and ultimately more backend infrastructure is needed. However, both IoT standards organizations believe there are misconceptions out there.

Martz said that while large quantities of data are being collected, the impact on data centers is misrepresented. The storage footprint is very small for the kinds of data being generated. However, he added that data centers really benefit when it comes to manipulating and working with the data through analytics.

“It’s about device-to-device and product communications,” said DesAutels. “We want things in your house to talk through APIs with one another and interact in safe ways. This orchestration requires things to talk locally, openly, through a robust protocol,” as opposed to constantly reporting back to the data center.

DesAutels gives an IoT-enabled lightbulb as an example. A consumer doesn’t want to turn on that lightbulb by opening up a smartphone, having that smartphone talk to a cloud on the opposite coast, which then remotely turns on the light in a few seconds.

“That’s not a world that anybody wants,” he said. “That’s a reflection of where we were several years ago with IoT.”

Instead, IoT’s value is about what he dubs “accidental orchestration.” As more devices are IoT-enabled and standardized, they will talk to other devices for cool, useful functionality, much of which hasn’t even been dreamed of yet. A large part of the future of IoT cuts out the data center.

A small example of accidental orchestration, said DesAutels, is when he starts watching a movie on Hulu, communication occurs locally between devices to dim the lights in the room automatically – no need for a cloud in the middle.

Another example could be a link from fridge to automatic water control to shut off the water main and send a text message if there’s a potential flooding problem; flooding is the number-one home insurance claim.

“Accidental orchestration is those kinds of thoughtful use cases where pieces stitch together that matter,” said DesAutels.

Accidental orchestration doesn’t cut the data center out of the IoT world altogether.

“Now If I was the company making that bulb, I have some problems to deal with,” said DesAutels. “I have an ERP to track manufacturing, and I have to keep track of serial numbers, etc. If I sell you a couple of lightbulbs, you activate them, and I have to provision devices, warranty, service, and support; I have to look at devices over time measuring performance over lifetime, usage, in a way that’s associated with you that respects your privacy and has no gaping security holes.”

There will be a ton of activity generated on the backend to make IoT seamless from a user perspective. There will also be frequent communication with data clouds for uses like telemetry in cars or a thermostats getting weather information.

AllSeen isn’t solely device-to-device focused, said DesAutels. It has a gateway agent, a bridging technology that connects the local network to the world. The gateway agent also performs device management and is the gatekeeper for uses like telemetry.

There’s a bit of foundation fatigue out there. There are foundations for everything. It can be frustrating when there are several competing IoT standards with ultimately the same aim; in this case, making sure Internet of Things works and everything can communicate through overarching IoT standards.