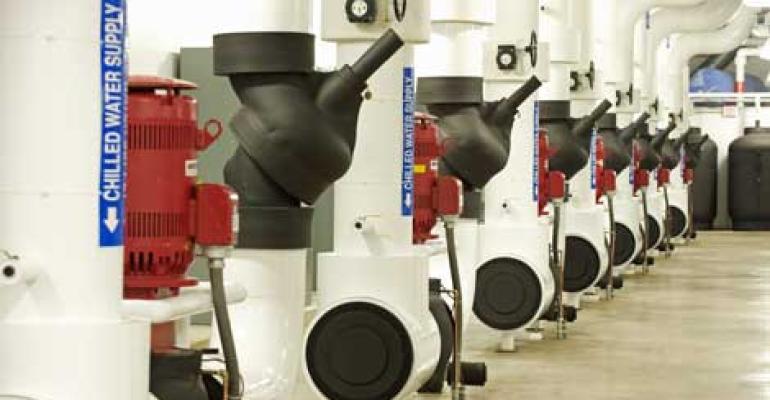 Chillers inside an older DFT facility in Ashburn, Virginia.
Design

DuPont Fabros Technology this week announced it has opened a new 336,000-square-foot data center facility in the Chicago area that at full build-out will have critical load capacity totaling 25.6 MW, according to the company.

Built across the street from an existing data center facility the wholesale data center provider operates in Elk Grove, the new CH2 facility is smaller than its predecessor but considerably more energy efficient, Scott Davis, the company’s executive VP of operations, said.

To achieve that goal, DuPont is employing a new data center design that employs medium voltage to generate more current. Davis said that higher level of current allows it to employ smaller generators that ultimately wind up creating more watts than the original CH1 facility. The design debuted inside one of the provider’s data center in Ashburn, Virginia.

In the first phase of CH2, DuPont is making available 7.1 MW of critical load capacity across five computer rooms totaling nearly 45,000 square feet. Customers can rent entire rooms or opt to share a room. The CH2 facility is already 20 percent leased, while CH1 is 100 percent leased. All customers using CH2 have to agree to make aisle-containment architecture around which the data center design is based.

Davis said the new design also eliminates the need for raised floors and enables DuPont to only have to run chillers about 25 percent of the time during the warmer months of the year. The CH2 data center, he said, has a PUE rating of 1.15, which compares to 1.31 to 1.38 for most of its other data center facilities.

Davis also noted that the data center design enables them to take advantage of oil-based power distribution units that are deployed outside the computer room.

“We excited about the PDUs because they give us an additional two percent efficiency,” said Davis. “There is also now more space available in the computer rooms for IT equipment.”

Finally, Davis noted that one of the reasons DuPont opted to build its facilities so close together is that it makes it easier to move staff between the facilities as needed.

He said that while the company plans to continue expanding its operations in the Chicago, Northern Virginia, and Silicon Valley markets, the company is also looking at expanding into other geographies, including Dallas, Portland, Toronto and Phoenix.