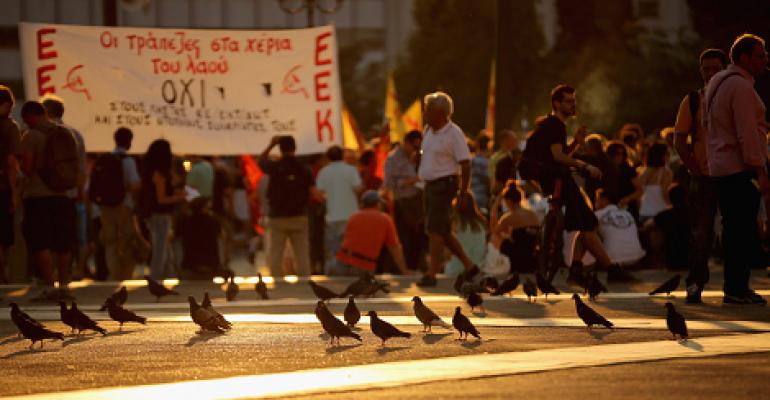 Protesters gather outside the Greek parliament to demonstrate against austerity after an agreement for a third bailout with eurozone leaders on July 13, 2015 in Athens, Greece. (Photo by Christopher Furlong/Getty Images)
Shared

Facing growing pressure from financiers, Greece is being constricted by government-imposed bank holiday and capital controls that prevent Greeks from accessing many necessary goods and services, including foreign cloud services.

The bank holiday has been continually extended as talks between Greece and its creditors continue. On Saturday, Economy Minister George Stathakis told media that even if banks reopen capital controls will remain in place for at least another two months.

For two weeks, capital controls have placed a €60 per day cash limit on ATM withdrawals, blocks to credit card payments to foreign vendors, and prohibiting any money transfers outside Greece without approval from a Ministry of Finance commission. This has all made it extremely difficult for companies to pay for cloud services and web hosting from foreign providers.

GoDaddy, a large international web host and the world’s largest domain registrar, has been manually renewing expiring subscriptions for its Greek web hosting customers free of charge. Only subscriptions set to auto-renewal will be extended.

Given that more than half of companies in Greece are “micro-enterprises” with less than 10 employees, many Greek business are likely to use services like GoDaddy for their domains and web hosting.

“A website and digital presence is not just a prerequisite for doing business. For an SMB, it’s also a criteria for survival,” GoDaddy EMEA VP Stefano Maruzzi told The WHIR. “We simply can’t accept that our customers in Greece will cease to exist as a consequence of the banking system shutdown. Helping our customers in any way, particularly in these tough circumstances is a moral obligation. Every subscription with auto-renewal will be extended to ensure their online presence will continue, supporting their businesses and families.”

Papaki, a major Greek web hosting provider, has also promised that its services would not be interrupted by the capital controls. All Papaki hosting services and email address that have expiration date on a bank holiday are automatically extended. Customers can still pay for services via credit or debit card (including VISA, Mastercard, and Euroline), existing Papaki account credits, or with their remaining cash balance in their PayPal account or through a PaySafe card purchased before capital controls were imposed.

Meanwhile, many individuals with .gr greek domain names should not be worried since the Hellenic Telecommunications and Post Commission (known as “EETT”) has announced that .gr domains will not to expire during the bank holiday period.

Consumer-oriented cloud service providers have also reacted to the capital controls. For instance, Apple is giving Greek iCloud users 30 days of free service, and Dropbox is offering free service until the situation is resolved.

Tech.eu is maintaining a crowdsourced list of how cloud service providers are dealing with capital controls. This ranges from offering free services, to providing a grace period (Mediatemple), to payment extensions on request (Microsoft Azure), to continuing billing but not suspending customers (Digital Ocean), to providing no special treatment to Greek customers (Adobe).

This first ran at http://www.thewhir.com/web-hosting-news/web-hosts-godaddy-and-papaki-promise-no-interruptions-for-greek-customers