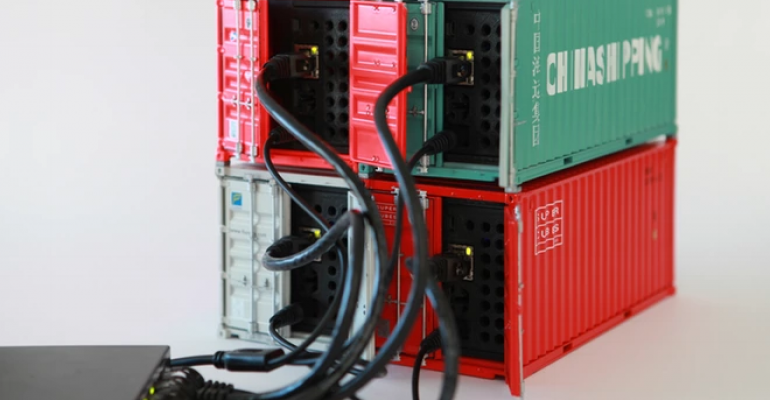 For those that need more horsepower, or just want a stack of containers on their desk, there is the Data Center reward level. 4 DC2s with a single power supply and 5 port gigabit switch. (Image: Hardtware Kickstarter campaign page)
Shared

As a software for containerized applications, Docker is often compared to a shipping container allowing an application to be packaged and shipped. A new Kickstarter campaign is taking the analogy further by creating a physical, model-train-scale container containing a Docker server.

The DC2 Desktop Container Computer is the first product from Dick Hardt’s new company Hardtware. It provides a desktop container server preconfigured with Docker in a container that’s a thirtieth the size of a full-size, 20-foot shipping container. It’s 3 ¼ inches (83mm) wide, 3 ½ inches (87mm) high, and 8 inches (203mm) long, and weighs 2.55 lbs (1.16 kg). You can customize the DC2 by selecting a variety of common shipping container colors and logos or add your own logo.

The DC2 is fanless, and features a dual-core 1.33GHz MinnowBoard Max processor, a 60GB Solid-State Drive with 400MB/s transfer speed, and Gigabit Ethernet. With its open hardware design, there are various expansion boards that can be used to expand or repurpose the DC2.

Having an external Docker container, however, isn’t just a novelty. A separate Docker container computer means that Docker VMs don’t leech local resources, and it makes it easier to set up Docker, and keep track of configurations like port mapping.

Kickstarter participants can pledge $399 for the full DC2 and $1,595 for a set of 4 DC2s with a shared power supply and a 5 port Gigabit switch. Those with an existing MinnowBoard Max can get an empty DC2 container by pledging $99.

DC2 can also be considered a cheaper alternative to Amazon. For an upfront price of $399, DC2 is comparable to two m1.small from Amazon, which cost $412 per year.

The DC2 project is also seeking feedback, suggestions and pull requests via its GitHub community page.

If there is interest, Hardtware is also considering add-on LED displays that could show the disk activity with a blue LED and load on each core with green-yellow-red LEDs), and even a 96×64 OLED that could show more information.

This first ran at http://www.thewhir.com/web-hosting-news/kickstarter-project-aims-to-make-desktop-sized-docker-container