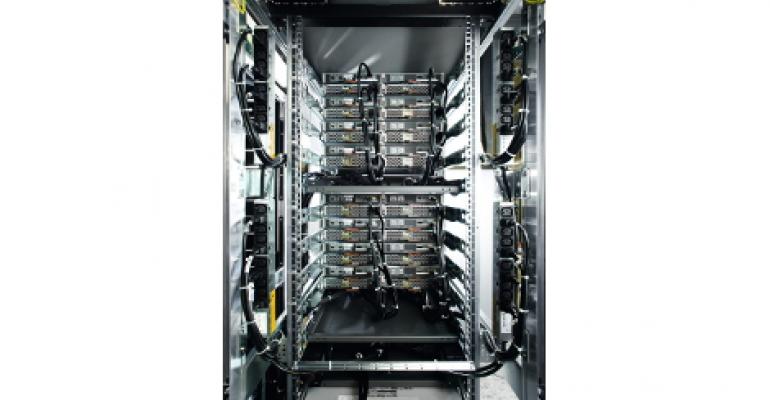 Cabling in the back of the Fujitsu Eternus DX8700 S2 storage system (Photo: Fujitsu)
Design>Storage

Vendor lays claim to biggest, most scalable storage system in the world

With the launch of a storage system capable of holding up to 14 petabytes of data that can be processed at speeds up to 4 million Input/Output Operations per Second (IOPS), Fujitsu today laid claim to delivering the biggest and most scalable storage systems in the world.

Priced starting at $200,000, the latest editions to the Eternus family illustrate what automated storage management is about to become like. While Fujitsu may have an early lead in terms of how storage automation will be done in the data center, IT infrastructure vendors are working on applying automation to almost every aspect of data center management.

The degree to which storage automation automation will become available at different levels of pricing will naturally vary. But at least for the time being, Fujitsu is providing one of the first glimpses of how storage management will evolve.

The new storage systems are designed to be simple to manage and provide utilization rates in the range of 90 percent, because each component of the system is automatically made redundant, Frank Reichart, director of product marketing for Fujitsu storage solutions, said.

“The traditional rule of thumb for maximizing storage performance has been to only use a maximum of 17 percent utilization,” said Reichart. “With these systems, utilization can go up to 90 percent.”

From a performance perspective, Reichart said, all storage administrators are now required to do is set the I/O response time or volume priority they want attached to any given application workload, and the storage system will automate the entire I/O process from there.

To ensure zero downtime, the new Fujitsu Storage Eternus DX8700 S3 and DX8900 S3 systems make use of third-generation PCIe interconnects and up to 24 storage controllers that in turn are connected to a series of front-end routers. The end result is up to 8,192 hosts can be connected to the systems that provide eight times as much I/O performance of their predecessors, according to the vendor.

At the top of the Eternus family, the DX8990 S3 can be configured with as many as 4,608 disk drives and up to 6 TB of processor cache and 67.2 TB of secondary cache in the form of solid-state disk drives.

Naturally, the capabilities being provided by Fujitsu may have a profound impact on storage administrators themselves. Instead of spending their time trying to maximize I/O performance, much of the manual work associated with that task will soon be eliminated. That may not only reduce the number of storage administrators required to manage petabytes of data; it may very well result in more consist levels of I/O performance being delivered across a greater number of applications per server.