https://www.datacenterknowledge.com/sites/datacenterknowledge.com/files/logos/DCK_footer.png
Recent
Recent
Is Liquid Cooling a Cure for the Moore’s Law Breakdown?
Jun 18, 2021
Schneider Electric Touts Smaller UPS Batteries on the Road to Sustainability
Jun 18, 2021
Top 5 Data Center Stories of the Week: June 18, 2021
Jun 18, 2021
Power Panel: The Era of Space-Based Data Center Capacity Planning is Over
Jun 17, 2021
Equinix’ $3.9B Investment Mega-boost: Who’s Impacted and How?
Jun 17, 2021
Featured
Sponsored Content
The Shape of the Edge in the Data Center
The Pros and Cons of Kubernetes-Based Hybrid Cloud
Feb 19, 2021
How Hyperscale Cloud Platforms are Reshaping the Submarine Cable Industry
Feb 17, 2021
Managing Encryption for Data Centers Is Hard. And It Will Get Harder
Feb 16, 2021

A symbolic data cloud is seen at the IBM stand at the 2014 CeBIT technology Trade fair on March 10, 2014 in Hanover, Germany. CeBIT is the world&#8217;s largest technology fair and the year&#8217;s partner nation was Great Britain. (Photo by Nigel Treblin/Getty Images)
Cloud

Investment in IT hardware by public cloud providers is growing faster than by any other type of hardware buyer. Money they spend on cloud data center expansion is the single biggest revenue-growth driver for servers, storage, and network hardware vendors, according to a new report by the market research firm IDC.

The amount of money companies spend on non-cloud IT continues to be enormous – far greater than cloud-infrastructure spend – but users increasingly augment their in-house IT infrastructure with cloud services. As cloud user base and variety of cloud services grows, so does investment in cloud data centers.

For cloud service providers, expanding data center infrastructure is also matter of staying competitive. Geographic scale and computing capacity are crucial attributes of a quality cloud service, so competition in the market is driving a lot of data center spending.

“The breadth and width of cloud offerings only continue to grow, with an increasing universe of business- and consumer-oriented solutions being born in the cloud and/or served better by the cloud,” IDC analyst Natalya Yezhkova said in a statement. “This growing demand from the end user side and expansion of cloud-based offerings from service providers will continue to fuel growth in spending on the underlying IT infrastructure in the foreseeable future.”

Another major growth area is investment in hardware for private cloud infrastructure. IDC expects companies to spend $11.7 billion on this kind of infrastructure this year, which is a nearly 17-percent increase year over year.

Public-cloud hardware spend this year will total $21.7 billion, or 32 percent up from 2014, according to IDC.

The analysts expect companies to invest $67 billion in hardware to support private clouds, which, as already mentioned, is about the same as last year.

Here’s a chart showing how the mix of public cloud, private cloud, and non-cloud IT hardware spend will change over the next five years, courtesy of IDC: 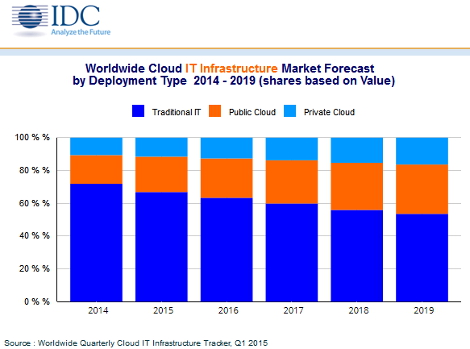