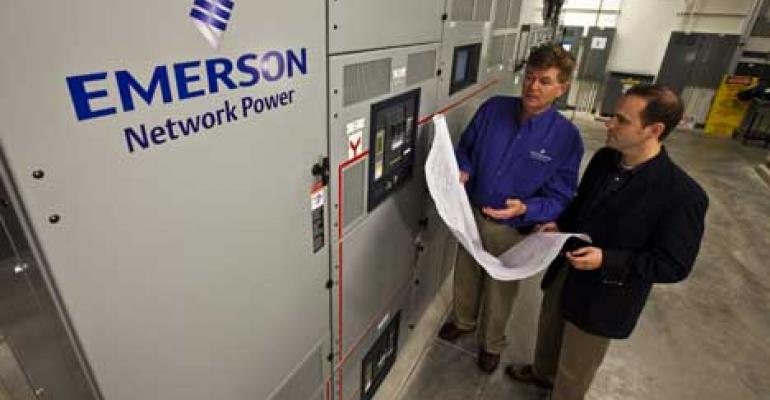 Emerson announced Tuesday a plan to spin off Network Power, its data center infrastructure business, as part of a restructuring effort.

Emerson Network Power is one of the biggest vendors in the data center market. Its logo has a nearly ubiquitous presence on power and cooling equipment in data centers around the world.

The company is also one of the leading data center infrastructure management (DCIM) software vendors. Its DCIM product is called Trellis.

As a separate entity, Network Power, which also sells telecommunications infrastructure equipment, will have more flexibility and ability to bring products to market faster to better respond to changing market dynamics and customer needs, the company explained.

“Emerson and Network Power will each have sharper strategic focus, enabling both companies to better allocate resources, incentivize employees, and allocate capital to capture the significant long-term opportunities in their respective markets,” Emerson Chairman and CEO David Farr said in a statement.

St. Louis, Missouri-based Emerson’s stock slumped about 0.30 percent in the afternoon following the announcement, trading at $55.28 per share at one point, but started climbing back up around 1 pm EDT.

The data center infrastructure business is one of five Emerson units. The other four are Process Management, Industrial Automation, Climate Technologies, and Commercial and Residential Solutions.

In its 2014 earnings report, Emerson reduced the 2015 outlook for Network Power, attributing the “more cautions expectations” to deteriorating economic conditions in Europe, Middle East, and Africa.

Network Power revenue was down 9 percent in the second quarter of fiscal 2015 (its most recently completed quarter). The segment’s margin shrunk to 3.2 percent.

Data center infrastructure business decreased moderately, the company said, attributing the decrease to “continued weakness in customer infrastructure investment.” Telco infrastructure sales were much worse, decreasing “sharply” as a result of spending cuts by telcos around the world.

Emerson said demand for the rest of the year will be mixed, expecting improvements in the data center market but not in the telco market.