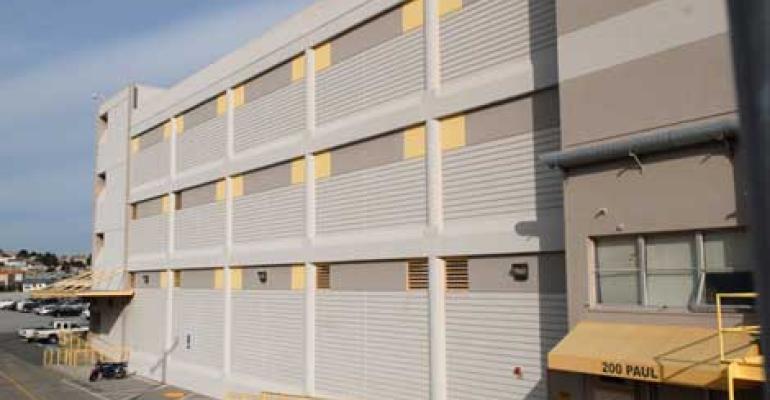 One of the meet-me rooms Telx operates is at the 200 Paul facility in San Francisco, owned by Digital Realty. (Photo: Digital Realty)
Business

Why Telx Acquisition Could Be a Good Move for Digital Realty

Digital has global scale and room to grow but has so far struggled with building out a robust interconnection play. Telx can help.

Acquiring Telx would fit well with Digital Realty’s current strategic direction, while putting the company in direct competition with Equinix, the world’s largest data center services company. Such a transaction would substantially increase Digital’s retail colocation and interconnection services play in all major US markets and add to the list of cloud services available to customers through Digital.

Digital, a San Francisco-based publicly traded real estate investment trust, is considering a more than $2 billion bid to acquire Telx, according to a Wednesday report by Reuters that cited anonymous sources. A representative from Digital declined to comment, referring to the news as a “rumor,” while a Telx spokesman did not respond to a request for comment. Answering analysts’ questions on the company’s most recent earnings call, however, Digital execs did not rule out a potential acquisition of another data center provider.

A deal would have to fit a specific set of requirements, however. The company would have to fit tightly with Digital’s strategy and add to its overall earnings per share. “We obviously would look at efficiencies that could be achieved, both on the operating side and the capital side, but we do believe that any investment we make for our shareholders should be accretive,” Digital CEO William Stein said on the earnings call in May.

Lots of consolidation has taken place in the data center provider industry recently. Equinix announced a plan to acquire TelecityGroup in Europe in May, breaking up a merger between Telecity and another European provider Interxion. Also in May, Digital’s rival QTS acquired Carpathia Hosting, a provider that does a lot of business with US government agencies. In April, CyrusOne, another rival, acquired Cervalis, expanding its presence in the New York market.

New York-based Telx is a private company, owned by private-equity firms ABRY Partners and Berkshire Partners, so information about its revenue or profitability is not publicly available. But it fits strategically with Digital’s recently renewed focus on services beyond its core wholesale data center business.

Digital has been in retail colocation for about five years, but that part of its business has not grown much. An acquisition of Telx would add 1.3 million square feet of data center space across 20 facilities to its colocation portfolio and a multitude of customers. A lot of that space is leased by Telx within Digital facilities.

“Digital Realty on one hand has conceded that its colocation business has been underperforming, coupled with a relatively stagnant interconnection business,” Jabez Tan, senior data center infrastructure analyst at Structure Research, said. “If Digital Realty were to acquire Telx, it could meaningfully alter [Digital’s] market position and potentially make it a serious player in the retail colocation and interconnection segment.”

Besides an increased focus on retail colocation, Digital has also been working to build a network of partners who provide cloud services. The aim is to offer customers joint solutions that include Digital’s data center space and the partners’ cloud services. Like rival Equinix, Telx has been leveraging the rich interconnection ecosystem in its data centers to attract cloud providers and turn the data centers into hubs where customers can get direct access to those providers. Equinix is far ahead of both Telx and Digital in building out a marketplace for cloud services.

If Digital is in fact eyeing a Telx acquisition, it is reportedly not the only potential bidder. There is a number of contenders, both domestic and international, according to the Reuters report.

If that’s the case, an acquisition by Digital would also have a defensive element. Since 2006, Telx, which specializes in running meet-me rooms, has had an exclusive contract to operate meet-me rooms in 10 of Digital’s data centers, including in some of the most important carrier hotels in the US, and a winning bid by Digital would prevent a competitor from taking over control of those interconnection facilities.

“It is a logical thing for Digital to bid on Telx, since Telx runs the meet-me room in several Digital Realty facilities and the company would not be thrilled to have a rival take over that space,” Kelly Morgan, research director for North America data centers at 451 Research, said. “However, such a move would be taking Digital Realty (and its investors) somewhat out of its comfort zone, so there are probably a lot of other issues for the firm to think about internally besides the price.”

While that may be true, Digital has been showing willingness to get out of its comfort zone. The company has a new executive team in place that’s pursuing a strategy of leaning on the traditional wholesale business and expanding it while increasing value of the portfolio by adding a wider variety of services through partnerships. A robust interconnection play, however, is more important today than ever, and acquisition of a company like Telx would improve that aspect of Digital’s business in a big way.