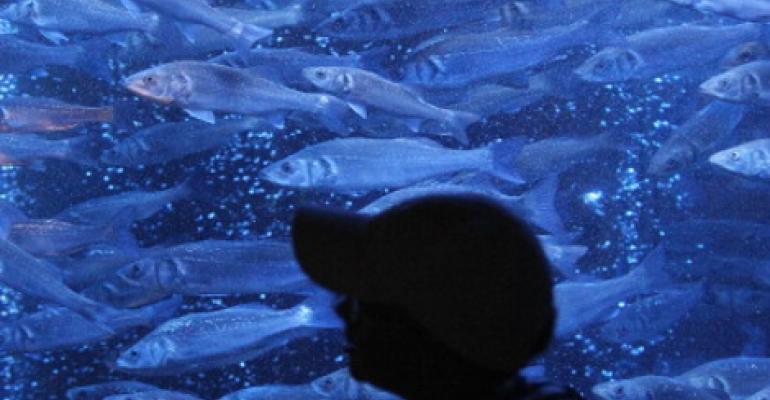 A visitor looks at European seabass in an aquarium of the Oceanographic Museum on the Rocher, or Rock of Monaco in 2011 in Monaco, Monaco. (Photo by Sean Gallup/Getty Images)
Business

An organization called the Foundry Project has a plan for an 8-acre brownfield in Cleveland in which data center waste heat would be reused to provide heat for an aquaculture farm. It’s still in early stages, but ideally the project would involve a bunker-style data center piping exhaust heat to warm water for a sustainable sea bass fish farm onsite.

There have been a few projects where data center waste heat has been recycled to heat nearby condos or offices. The Foundry Project is similar in intention but different in terms of approach, finding a unique symbiotic relationship between servers giving off heat and sea bass.

This is a rare example of a project that attempts to combine a data center with a completely unrelated facility in way that is mutually beneficial. Because a data center is a massive power and water consumer and a huge source of excess heat, people are often compelled to look for creative ways to utilize those aspects of mission critical facilities. Another example is a project in California's drought-stricken Monterey County, where a group of entrepreneurs wants to combine a data center with a water desalination plant.

The first initiative is the aquaculture facility, a fish farm that will produce 500,000 pounds a year of Mediterranean sea bass. A tech incubator is also planned for the site.

However, key to the project is a 20,000-40,000 square foot data center built underground. The data center would be occupied by a service provider or another customer looking for a sustainable, unique facility, not the fish farm itself. Details about the build aren't finalized, with Foundry currently looking for the right data center developer.

A rendering for the proposed Foundry Project that seeks to combine a fish farm and a data center. The data center would be the two-story building. Foundry also has plans for a tech incubator in the tall building (Image: Foundry Project)

“We’ve found components that are compatible and want to turn weakness into strengths,” said J. Duncan Shorey, an environmental attorney, consultant, and geothermal expert who's involved in the project. "The big home run on the data center is the recovery of the waste heat and repurposing that heat."

There’s a sustainability story, and there's an economic development story in Foundry Project’s vision. The site is in an urban zone in a neighborhood that's in need of economic stimulation. The right infrastructure for a data center is in place. Foundry said there’s a ton of power coming in, and the project's leaders have been assured the location will be able to tap 100 Gigabit per second fiber network Cleveland is in the process of building.

Shorey said the redevelopment would employ an extremely simple system that would not only help lower carbon footprint but also simplify data center design by eliminating the need for chiller towers. Given that water could be a concern for a data center, the heat recycling process would occur in a separate structure than the data center, said Shorey.

The process is simple: take hot air, run it through a water sourced heat pump, extract that heat and pipe it into the fish tank. The energy comes from either chilled or hot water depending on the season and used to heat the conditioned space. Hot water would be pumped in a geothermal well in the summer and in the winter it would be pumped in the agricultural center or offices.

Geothermal wells have a huge capacity of absorbing energy. All winter long, that stored energy can be used as a source of heat.

The project is currently looking for the right data center developer, said Michael Dealoia. Dealoia has done economic development work with Cleveland, acting as the city's tech czar of sorts. His background is in data centers and networks, including roles with Expedient. He is also a co-founder of local service provider BlueBridge Networks.

“It’s a high-visibility opportunity,” said Dealoia regarding the project. Foundry has spoken with Cleveland Economic Development and other local officials who are very supportive of the project, as it could be a good generator of jobs and provide economic stimulation to an area in need.

It is an economically challenged area, but there’s also an opportunity to build something impactful, said Dealoia, adding that the city would open its arms to the data center. It also means that the land is inexpensive.

There’s a significant amount of money at city, county, and state levels to help get the project rolling. Ohio has attractive data center incentives, and government officials on local levels all want to support economic stimulation.