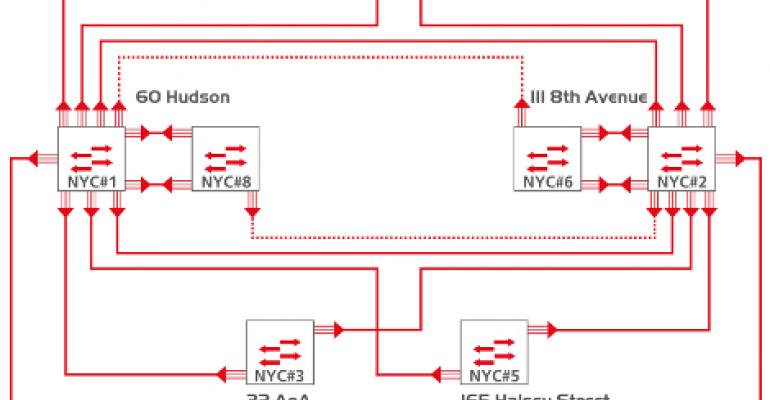 The topology of DE-CIX in New York (Image: DE-CIX)
Design>Networks

After establishing itself as a dominant provider of internet exchange services in Germany, DE-CIX will spend most of the coming year expanding its footprint into the Middle East, Africa, and North America.

“The Istanbul facilities will initially focus on the local Turkish market, but in time we think it will serve international traffic as well,” says Orlowski. “The Palermo and Marseilles facilities will connect our network to Africa.”

DE-CIX will also probably extend its presence in North America beyond the facilities it currently has in New York.

While the vast majority of the data centers that DE-CIX operates are in Germany, the company has also built out some data center capacity in the United Arab Emirates.

Meanwhile, back in Frankfurt, where DE-CIX claims to manage the world’s largest internet exchange, DE-CIX this week revealed that it has recorded an all-time record peak throughput volume of 4 Terabit per second. In addition, the company noted that in the first quarter of 2015, customers ordered the same number of 100 Gigabit Ethernet ports as they did in all of 2014.

As a result, DE-CIX reports that it is planning for an increase in IP traffic levels of 20 percent per year for the foreseeable future.

Other strategic initiatives, says Orlowski, include the rolling out of software development kits (SDKs) that would enable developers to invoke application programming interfaces (APIs) to enable organizations to programmatically self-service their own networking needs within a set of defined parameters. Based on API management software that DE-CIX developed internally for its own needs, Orlowski says, DE-CIX will begin testing those services in the coming year.

Most of the increased demand for internet exchange traffic, says Orlowski, is being generated by high-definition applications, content delivery networks such as Akamai, and cloud applications that are particularly sensitive to network latency.

Naturally, pricing competition across the global internet exchange market these days is especially fierce. That means by definition the ability to operate at scale is now a life-or-death matter for all concerned.