Gartner: AWS Pulls Further Ahead of Others in IaaS Cloud Market

Gartner's annual Magic Quadrant for IaaS report increases AWS market share over last year. Last year, Gartner said it had 5 times the cloud capacity of the next 14 combined. It now has 10 times the capacity.

Gartner has released its annual Infrastructure-as-a-Service Magic Quadrant, reporting that Amazon Web Services has once again built on its seemingly insurmountable lead last year, while many vendors trended down and to the left. In Gartner MQ parlance, no quadrant is bad, however.

This is the fifth consecutive year AWS has taken the leader spot in the evaluation of the public infrastructure cloud services market. Given the company finally broke out revenue for cloud, there are hard numbers backing this up.

Gartner increased its estimate of Amazon's share of the IaaS cloud market. AWS has ten times more cloud capacity than the other 14 providers combined. Last year, AWS had five times all the others combined, according to Gartner. AWS not only had more cloud capacity, despite increased requirements in Gartner’s evaluation, but improved position over both axes of the Magic Quandrant.

EMC's recent acquisition of Virtustream will likely affect its position in next year's report. 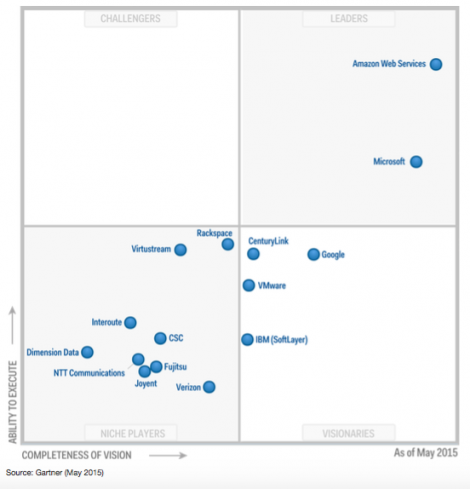 The Gartner Magic Quadrant for IaaS 2015 shows last year's cluster is breaking up, and AWS still in the clear lead (image: Gartner)

The biggest drops were across IBM, CSS, and Verizon, while HP left the report entirely. Rumors swirled around HP abandoning the public cloud earlier this year, however it’s more accurate to state that it has devalued public cloud as a standalone part of its strategy, shifting focus to private cloud or cloud as complement to a wider portfolio. These same rumors circled Rackspace last year, which also denied it was getting out of the IaaS market.

The reason for these rumors, and for many vendors dropping in the latest report is because it examines only public cloud compute, not storage, managed services, or any other services built atop cloud. In that regard, AWS is a clear leader, and Microsoft is doing well, considering it was a later entrant.

Google's performance and position in this segment of the cloud market were disappointing. Google improved its ability to execute but the company that often fills out the "Big Three" is not yet considered a leader by Gartner.

According to him, there are two types of IaaS providers: those that treat it as a centerpiece, such as AWS, Google, and Microsoft – companies with scale – and those that treat IaaS as a component of an IT portfolio strategy.