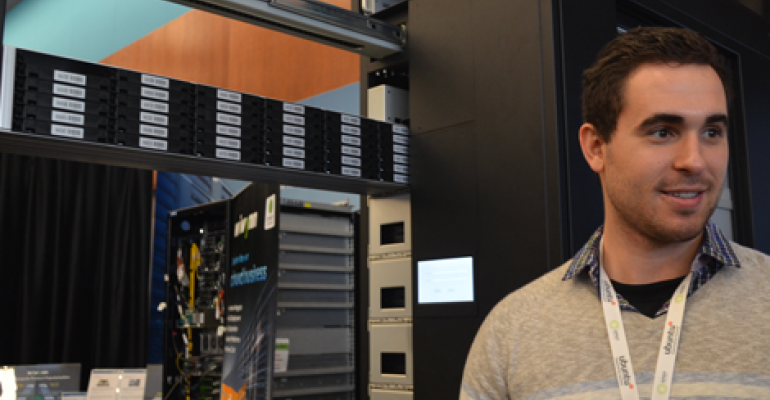 Matthew Niewczas, a hardware test engineer at Facebook, stands by the cold storage unit, where he was explaining the technology of using Blue-Ray disks to store data. (Photo by Colleen Miller.)
Business>Deals

Sony has acquired Optical Archive, a startup that spun out of Facebook that uses Blu-Ray technology in an innovative way. Instead of a medium for video, Facebook saw in Blu-Ray a potentially cost-effective data storage medium. Sony will likely develop a similar system that may someday be used in data centers. Terms of the deal were not disclosed.

Optical Archive developed a storage system that packs 1 petabyte of data into a single cabinet filled with 10,000 Blu-Ray optical disks. The solution also employed a robotic retrieval system similar to those used to retrieve tape from archived storage units. This wasn’t the Blu-Ray’s intended use, but it did give the discs a renewed purpose.

Facebook has not yet deployed the system, the company told Wired, but is currently testing it.

Frank Frankovsky founded Optical Archive. Frankovsky was responsible for streamlining data center hardware for the social media giant. The Blu-Rays were used for “ultra-cold” storage. While Blu-Ray is not ideal for primary storage because data can’t be retrieved instantly, for data that is rarely accessed, it provides a very cheap solution.

Using Blu-Ray disks offers savings of up to 50 percent compared with the hard disks Facebook is using in its newly-completed cold storage facility at its data center in Oregon. Blu-Ray also uses 80 percent less energy than cold storage racks because the cabinet only uses energy when it’s writing data during the initial burn.

Each disc is certified to retain data for 50 years, another plus, and it can operate in a wide range of environments. As the battle for the high end, IOPS side of the market raged on, Facebook innovated at the tape level.

Facebook believed that this could be of broader use, and Sony – creator of Blu-Ray technology – share this sentiment.

Currently, discs are being developed that blow past the 50GB threshold of Blu-Ray, housing as much as a terabyte. This would mean a company’s entire cold storage on a couple of cheap, plastic discs.

The death rattle for Blu-Ray disks began almost as soon as they were released, with the emergence of streaming movies and digital downloads. This is not the first time that a mature technology believed to have one foot in the grave roared back in a big way.

Nintendo visionary and Gameboy inventor Gumpei Yokoi called this “lateral thinking with withered technology.” Yokoi was famous for finding ways of using outdated technology and creating something that blew past technically superior competitors. The Nintendo Gameboy used a simple dot matrix and crushed full-color, powerful handhelds like the Atari Lynx and the battery-chewing Sega Game Gear.

Blu-Ray is a mature technology, which is cheap and well-understood – lateral thinking requires looking at mature, cheap tech and finding new, radical uses.

IT operations people are familiar with the concept of lateral thinking with withered technology. Budget limitations often mean having to make something work within limited parameters – stretching technology as far as it can go.

Facebook has the benefit of experimenting with unique approaches, and the company has graciously shared many of its innovations through the Open Compute Project. Now, if only somebody could figure out a way to repurpose those AOL Trial CDs from the 90s.