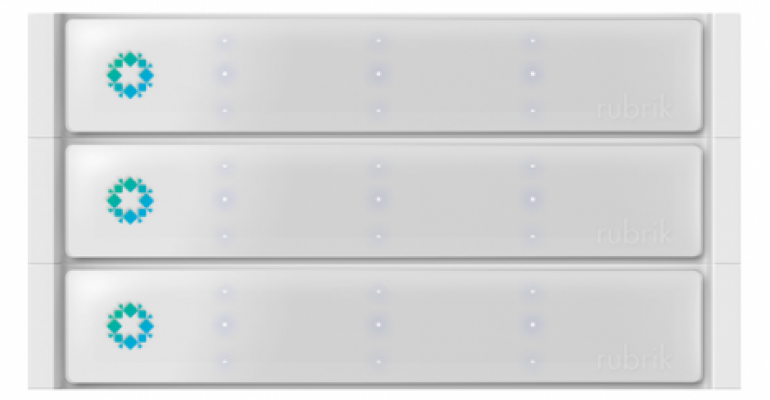 Rubrik&#8217;s appliances have a simple aesthetic in addition to alleged ease of use (Image: Rubrik)
Business

Enterprise storage has long been a pain point for many and is one of the biggest impediments to retuning IT for the web-scale age. For this reason, investment continues to flow into companies tackling this space.

Two breeds of “all-in-one” functionality companies are emerging: those with appliances packed to the gills with features, such as Rubrik and Nutanix, and those that tackle storage strictly from a software perspective, such as Veeam and SpringPath. Rubrik says it's different from the likes of Nutanix because it controls the secondary environment (think backup, etc.) rather than the primary environment that Nutanix provides.

Rubrik’s team is made up of several Google and Facebook alums looking to translate their web-scale know-how to the enterprise world.

Will enterprises choose the appliance route or the commodity hardware route? Both have their advantages.

Appliance vendors argue that enterprises desire the turnkey simplicity of appliances, while those focusing on the software-defined approach say it is not as disruptive to existing infrastructure.

However, all converged data management vendors are facing trust hurdles. The software fabric underlying all of these platforms needs to be easy to learn and use in addition to potential integration worries.

Enterprise backup and storage fabric competitor Veeam recently noted explosive growth without the need of funding. The company claims it has added close to 11,000 total paid customers in the last quarter, compared to an average of 3,500 in the past. Like Rubrik, Veeam is a channel play.

Rubrik’s sizable funding will help it expand its channel and customer base. The company has eliminated as many barriers to adoption as it could think of: the system reportedly takes 15 minutes to set up and is extensible with public cloud storage.

The appliance takes up two rack units and does many things. The company claims it eliminates backup software by integrating data protection, instant recovery, and DevOps infrastructure into a single fabric.

It comes pre-configured with the Rubrik Converged Data Management Platform. It’s a storage convergence play, with Rubrik taking care of several storage-related processes in what it calls the secondary environment, such as backup, deduplication, and compression.

Turning Rubrik into a storage endpoint means developers can rapidly provision data. As a mountable live storage endpoint, the company claims it provides zero-time recovery, allowing applications to be recovered instantly. Rubrik also has strong search functionality the company calls “Google-like,” allowing customers to locate any data with predictive search results based on data stored across private and public clouds.

Companies are having to do more with less, either in terms of people or in terms of budgets. IT convergence vendors are glomming on to the idea of DevOps because as development and IT Operations becomes more intertwined in terms of people and process, it will need infrastructure tailored to treat both as a single entity. Historically separate functionality is collapsing into platforms that act as a single point of control. These platforms need to be simple to operate.

“In my twenty years of IT experience, I’ve used pretty much every solution in Gartner’s Magic Quadrant and they’re so complicated that you need a PhD to operate any of them,” said Jaime Huizar, senior architect, Power Integrations. “With Rubrik, it took ten minutes to get up and running. Our upfront software and hardware costs were reduced by 4x.”

Greylock has made several investments around DevOps, believing the evolution will happen at an increasingly rapid pace.

“We invest in world-class teams who build category defining companies in large markets,” said Asheem Chandna, general partner, Greylock. “As with our previous investments in Data Domain, Pure Storage, and Docker, we see Rubrik as a game-changing company that radically simplifies data management and bridges data across public and private clouds.”

As part of the investment, Chandna will join Rubrik’s board of directors.