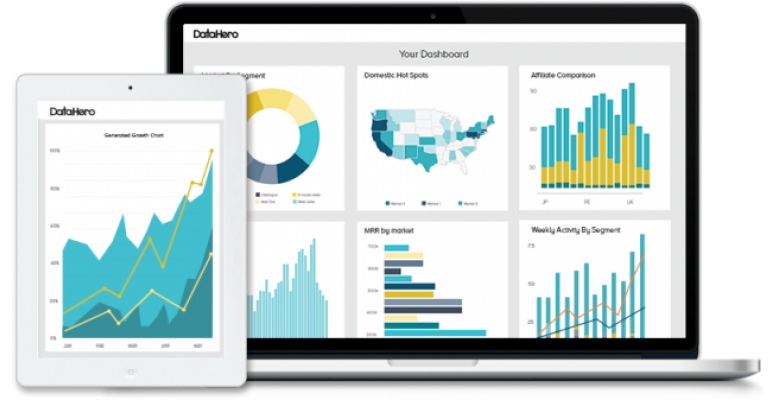 Where data is stored and how it’s accessed is shifting and Business Intelligence (BI) is evolving. Cloud BI provider DataHero has raised $6.1 million Series A to address the architectural shift and simplify data analysis. The funding will go towards expanding development of its core technology, and scaling its operations and support infrastructure.

DataHero provides self-service BI delivered as Software-as-a-Service. It aims to take traditional business intelligence and make it a quick and easy to use service, much like Salesforce did with Customer Relationship Management.

DataHero's core technology consists of a data classification engine and pre-built connections to dozens of popular cloud services. Through a drag-and-drop interface, users are able to import and analyze data from popular services including Salesforce, HubSpot, Marketo, Google Analytics, Dropbox, Stripe, and Excel.

The round was led by existing investor Foundry Group.

“We invested in the company three years ago because we identified a real market gap for data analysis for the non-technical user,” said Ryan McIntyre, managing director and co-founder of Foundry Group. To thrive in today’s business environment, companies need to shift from traditional gut-based decision making to a data-driven mindset for everyone in the organization. This is what DataHero is all about.”

Along with the funding, the company also named software veteran Ed Miller as new CEO. With over 25 years of experience, Miller has led several startups to successful outcomes, most recently Xythos, which was acquired by Blackboard. Blackboard was later acquired for $1.6 billion by Providence Equity partners.

As traditional enterprise software moves to SaaS, the business model is affecting the product. SaaS providers need to provide a quick way to get up and running and a compelling reason to continue to use the service, as they need to win the customer's business every month. A company would be more inclined to stick it out with something it paid a lot of money for upfront, whereas a SaaS subscription is likely to get cancelled if it isn't easy to use and worthwhile on an ongoing basis.

Cloud BI provider Bime said last year that, while there still remains some psychological barriers to performing BI in the cloud, in terms of technology, SaaS BI has surpassed on-premise offerings.

Following funding, the company announced a partnership with HubSpot to bring self-service analytics to marketers. HubSpot provides the full funnel marketing and sales solution, while DataHero delivers the visualized analytics to support that funnel. Users can track when customers close deals, filter by custom fields, and display their data in different time groupings.