What Digital Realty’s New CIO is Up To

SAN FRANCISCO – About 10 years ago, when he was CIO at Align Technology, a Silicon Valley-based maker of dental aligners, Michael Henry applied Lean, a methodology for eliminating waste from the manufacturing process developed by Japanese manufacturers during the second half of last century, to optimize the processes that occur between the time a dentist takes an image of the customer’s dental structure and the time the customer’s aligner arrives at the dentist’s office.

“While the business models are different, and certainly some of the pain points in the market segments are different, the way technology adds value for companies is not dramatically different,” he says. It’s ultimately about using technology to deliver whatever service or product the company provides faster and to improve quality.

At Align, he used a combination of process redesign, automation, and making operational data available to staff in real time. Manual packaging was replaced by automation, for example, and so were some aspects of creating digital models of customers’ dental structures. 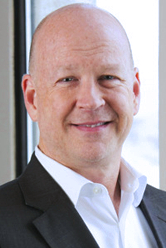 As CIO at Rovi, his most recent gig prior to joining Digital, Henry and his team transformed infrastructure into “infrastructure as code,” building infrastructure and platform services to automate and bring a manufacturing mindset to software development with the goal of improving time to market and code quality.

When we sat down with Henry in April at the company’s sunny head office with windows overseeing San Francisco Bay in the city’s Financial District, it was too early to talk specifics about what changes he had in mind for Digital’s processes. He had only started at the company early that month and was still in “data acquisition mode,” as he put it.

But one of the directions he’s looking in is a direction set by Bill Stein, Digital’s recently appointed CEO who has served as the company’s CFO since its IPO in 2004. Henry is looking across industrial, operational, and enterprise systems to “help achieve Bill’s vision of getting information out of those systems and unlocking it, so that people can make better decisions faster to drive value” he says.

Data and data analytics have always been CIO’s best friends, but capabilities for data collection and analysis made possible by modern technology are unprecedented, so that’s one area where we can expect more focus for Digital. One option could be applying analytics and visualization across operational data from data center facilities to respond to outages faster and more effectively, Henry says.

The Power of Modern Analytics Tech

He seems generally excited about the analytics capabilities that are accessible nowadays. The way companies have traditionally addressed Big Data has been building out internal data warehousing systems and analytics applications. But with the volume of data companies gather now growing exponentially, many are realizing that more often than not you just cannot buy enough hardware and evolve your in-house analytical capabilities quickly enough.

The good news is that’s no longer necessary. “There are companies now on the market that are starting to make it very easy for you to do that,” Henry says, noting companies like Tableau and Burst as examples.

“They’re beginning to take some of Burst’s data warehousing in the cloud and analytical capabilities and Tableau’s visualization capabilities and allow people to get stuff done in days that used to take months before,” he says.

Henry joins Digital during a time of big changes, and his role is one of them. As the data center industry evolves, the company, whose traditional bread and butter have been big long-term space-and-power leases, finds itself needing to evolve too.

Digital has placed a lot more emphasis on partnering with service providers that can add things like managed hosting, cloud, or cloud connectivity services on top of its traditional offerings. The company has also been selling non-core real estate assets promoting more actively its retail colocation services in markets where it has robust colocation facilities, such as San Francisco and Dallas.

Now that its new management team is fully rounded out – the company also appointed a new COO and CFO in April – Digital is set to begin the next chapter, eyeing international expansion and maximizing the value of its existing footprint in the U.S., Europe, and Asia.