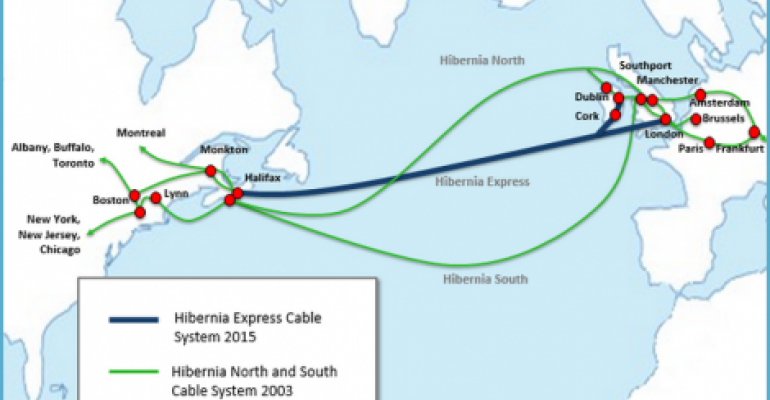 Hibernia Express, a high-capacity subsea transatlantic cable, is expected to be ready for service in September 2015 (Image: Hibernia Networks)
Companies>Microsoft

Microsoft is investing in several submarine cables to better connect its data centers and boost its cloud services connectivity worldwide.

Microsoft is investing in several submarine cables to connect data centers globally and in support of growing data network needs. The latest investments strengthen connections across both the Atlantic and Pacific oceans, connecting several countries.

Microsoft deals with Hibernia Networks and Aqua Comms strengthen connectivity across the Atlantic, while the New Cross Pacific (NCP) Cable Network and a first physical landing station in the US will better connect North America to Asia.

Across the Atlantic, Microsoft is investing in a cable with both Hibernia and Acqua Comms to connect Microsoft’s North American data center infrastructure to Ireland and on to the United Kingdom. Hibernia said the partnership will translate to a cost-benefit for Microsoft customers.

Hibernia Networks’ new Express cable will connect Halifax, Canada to Ballinspittle, Ireland to Brean, UK. The cable helps support Microsoft’s backbone, connecting several data centers. The Express cable pair will yield in excess of 10 Tbps per pair, which is nearly triple the 3.5 Tbps per pair delivered on the current systems.

Across the Pacific, the New Cross Pacific (NCP) Cable Network has commenced construction. Microsoft joined the NCP consortium comprised of several major Chinese telecommunications companies. As part of its participation, Microsoft will invest in its first physical landing station in the US connecting North America to Asia.

NCP will provide better data connections between North America and Asia. The NCP will link Hillsboro, Oregon to several points on China’s mainland, South Korea, Taiwan and Japan. The cable system will deliver up to 80 Tbps of capacity.

“As we look at how people and businesses will interact with technology in the future, there are investments we need to make now to support our customers and help their businesses grow,” wrote David Crowley, managing director, Network Enablement, Microsoft.

Microsoft’s latest earnings showed the Commercial Cloud division, which includes Azure, Office 365 and other services, grew over a 100 percent. As the company expands its global cloud infrastructure, a strong subsea strategy is needed to ensure high availability.