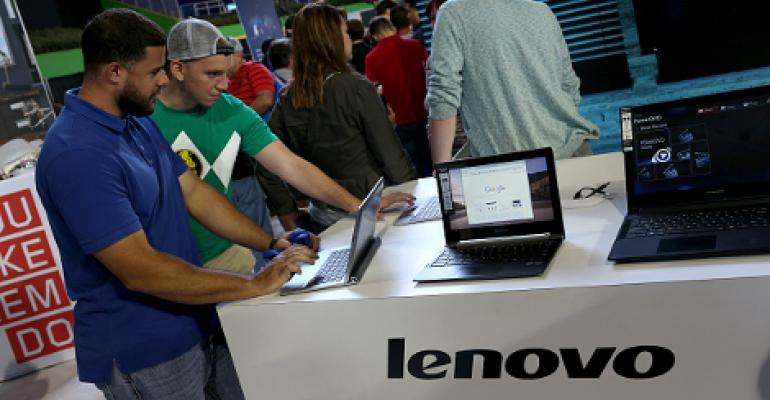 Lenovo booth during the TigerDirect Tech Bash at the Miami Marlins Park in 2014 in Miami, Florida. (Photo by Joe Raedle/Getty Images)
Blades

When configured with Xeon E7-4800 v3 processors, these system are 50 percent faster than previous generations of Lenovo servers thanks to the usage of DDR4 memory that can be deployed across 192 DIMM slots, according to the vendor.

Lenovo is also extending support for the new Intel chips to its converged four- and eight-socket Flex System X6 Compute Nodes to provide access to as many as 144 processor cores.

Stuart McRae, director of enterprise server marketing for Lenovo, says both four- and eight-socket platforms will enable Lenovo to compete more aggressively at the higher end of the x86 server market.

Prior to the Chinese company’s acquisition of IBM’s x86 server business, most of Lenovo’s server efforts were focused on lower-end tower servers. Since then the company has been making a concerted effort to expand its presence in both the blade and rack server categories.

Lenovo has stated it plans to increase server sales by 30 percent in the coming year. Much of that sales effort, says McRae, will focus on replacing RISC servers.

“These platforms are ideal for databases such as Oracle and SAP Hana,” says McRae. “Benchmarks show these systems are 50 percent faster than any RISC system.”

To that end, Lenovo today also announced it is packaging new EMC storage systems with these servers to create offerings that are optimized for SAP Hana environments.

Each member of the family, says Intel, can be configured with up to 18 cores – a 20-percent increase in cores compared to the prior generation – and up to 45 megabytes of last-level cache. The processors themselves can support servers configured with as many as 32 sockets.

The end result, says Intel, is as much as a ten-fold improvement in performance per dollar depending on how those servers are actually configured.