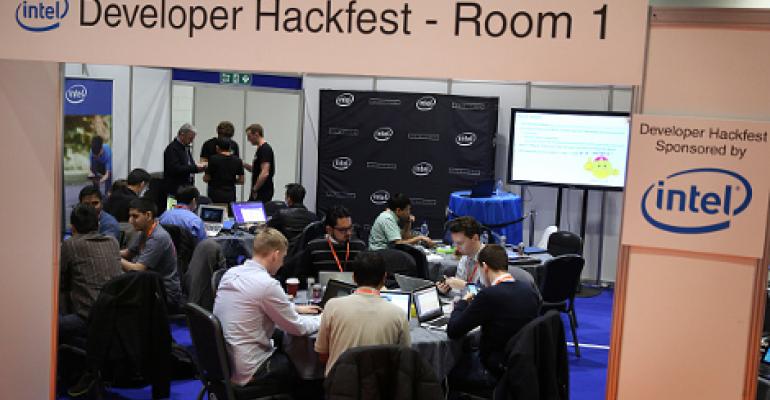 Visitors to The Wearable Technology Show 2015 at ExCel take part in a developer hackfest in London. (Photo by Peter Macdiarmid/Getty Images)
Shared

With a role that combines some of the skills traditionally divided between operations and development, DevOps is becoming a highly sought-after skill set in organizations, and is demanding high salaries according to a new study.

Incapsula, the maker of a cloud-based application delivery service for DevOps teams, has recently released the results of a survey filled out by 442 DevOps professionals in December 2014. Overall, they found that the median salary for a DevOps professional is $105,600, and more than three quarters (76 percent) of respondents reported an increase in 2014 earnings compared to 2013.

Overall, nearly half (48 percent) of DevOps received a bonus in 2014, and the vast majority (85 percent) expect their salaries to increase in 2015.

Salaries Vary Based on Company Region, Industry, and Size

A Formal “DevOps” Title is Worth a Lot

What’s also interesting to note is that DevOps, being a relatively new category, may not be reflected in formal job titles. The study actually looked into the salaries of respondents who don’t have “DevOps” in their job title, but claimed to have some DevOps responsibilities. These individuals range from Project Managers on the low-end of the payscale to Director of IT on the high-end.

The study found that those with “DevOps” titles tend to make more money. For instance, DevOps developers average $90,000 compared to web developers who make $88,000.

DevOps Professionals Come in “All Shapes and Sizes”

It’s interesting that over half (52 percent) of respondents have a Bachelor’s degree, while a quarter have master’s degrees, suggesting that at least an undergraduate education is a requirement to enter the field. But, based on the survey results, it doesn’t seem that a formal education is a determining factor regarding DevOps salaries. For instance, the average DevOps professional whose highest formal education is a High School diploma was $160,734.

The study notes that DevOps professionals “come in all shapes and sizes,” but the typical respondent tended to be male, be between 25 and 44 in age, have a bachelor’s degree, and have one to six years of experience in their current role.

Nearly all of those surveyed were men (96 percent), meaning that conclusions on pay equity can’t be adequately drawn from the data.

The Skills Needed for DevOps

As noted before, DevOps is an emerging field and the technical skillset often straddles what would typically be done by IT administrators and developers. According to respondents, the most valuable technology skills are cloud deployment and virtualization (31 percent), programming and systems architecture (27 percent), and configuration management (22 percent).

Those wishing to advance their DevOps career, according to respondents, should “understand the business side”, develop their communication skills, stay current with new technology, and remain flexible and open to change. It is a relatively new field after all.

This first ran at http://www.thewhir.com/web-hosting-news/new-study-looks-factors-determine-devops-salaries