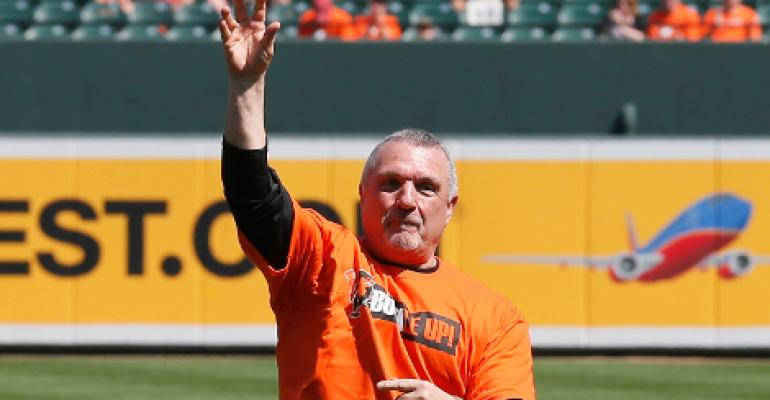 Rudy Ruettiger, the Notre Dame football player whose quest to make the team was turned into the poplular movie &#8216;Rudy,&#8217; throws out the ceremonial first pitch before the start of the Baltimore Orioles and Tampa Bay Rays game at Oriole Park at Camden Yards on September 13, 2012 in Baltimore, Maryland. (Photo by Rob Carr/Getty Images)
Events

Daniel “Rudy” Ruettiger gave an inspiring keynote to start off the Data Center World conference in Las Vegas Monday. Rudy is best known for the 1993 movie “Rudy” about an undersized kid with a dream of playing for Notre Dame.

Rudy is bigger than the man – it is a symbol for the triumphant underdog. An industry that's undergoing drastic change with the emergence of cloud, and fewer giant tech companies with massive data centers increasingly housing more of the world’s servers, the data center industry can use a good underdog story.

There are a lot of surprising parallels between a kid with a dream of playing for Notre Dame and the data center industry. Many of us hold a dream, and like Rudy, we’re inundated with negative voices. Rudy’s message was to focus on one voice and get rid of the negative voices. The most important factor is not where you are or what you have today but your passion.

Rudy attributes passion for where he is today. He was not without his share of negative voices but managed to block all the naysayers out and hold a singular vision. Because of his positive attitude, he was often a leader of men despite not being the strongest or smartest – he suffered from learning disabilities and Catholicism, he said.

Rudy’s story goes beyond the movie. He ultimately did play for a moment in a game to the cheers of a crowd, giving birth to one of the most inspirational underdog stories of all time. However, his singular positive vision changed the course of his life in several ways. Each time he was faced with adversity, he said, he overcame through patience and trust in his vision.

Making the movie itself wasn’t a sure thing. Rudy spoke of the relationships it took to make the movie happen, and how that same resiliency that led to his Notre Dame moment led to the creation of his tale.

He first had to convince the writer -- who hated Notre Dame -- that this was a story that needed to be told. He told a story of sitting in a restaurant in Santa Monica for four hours never to have the writer show up.

Most would feel dejected, but he struck up a conversation with an older man outside who happened to know where the writer lived. The two had an instant connection, which he said was something that happened to him all the time, because everyone can identify with the "Rudy" mentality. He went to the writer's house and that singular positive attitude -- the same that got him into Notre Dame following several rejections -- got the movie written. It's easy to guess how the rest of the ducks lined up.

Whether a startup or a sizable company, it all starts with a dream. The most successful people all share the kind of determination that Rudy has.

You can make magic happen even if you’re not an Amazon or Microsoft, even if you don’t have all the resources in the world. Resiliency, collaboration, keeping your focus positive and most of all, trusting in your dreams will not only take you far, it will make you someone people want to know. “A lot of people quit when it’s darkest,” he said. “Listen to that positive voice. Define who you are through patience.”