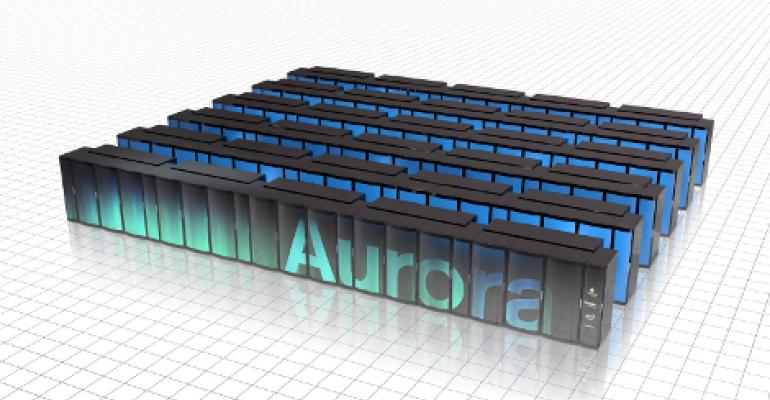 Intel announced that it has been selected by the U.S. Department of Energy to deliver two powerful next-generation supercomputers for the Argonne Leadership Computing Facility at the DoE's Argonne National Laboratory in Lemont, Illinois (close to Chicago). The two systems are part of a multi-million-dollar collaboration between Argonne, Oak Ridge, and Lawrence Livermore national labs and may become the world's fastest supercomputer.

Intel noted that for the first time in almost two decades it was selected as the prime contractor to build the two systems, in collaboration with Cray. The larger of the two systems, called Aurora, will be based on its scalable high-performance-computing-system framework and reach peak performance of 180 petaflops. Currently the fastest supercomputer in the world, according to the most recent Top500 list, is China's Tianhe-2, with peak performance of 33.86 petaflops. An option exists for Aurora to increase its peak performance up to 450 petaflops, according to Intel.

Aurora will feature Cray's next-generation "Shasta" supercomputer. Cray CTO Steve Scott gave a few early details about the Shasta system architecture, saying that it will be the infrastructure that takes them all the way to exascale computing.

In order to lead the way for what will most likely be the fastest supercomputer in the world when it is completed in 2018, Intel says, Aurora will combine Shasta with many new Intel HPC building blocks. Aurora will feature the third generation of Xeon Phi processors, code named Knights Hill, and the next generation of Omni-Path Fabric high-speed interconnect technology. Intel says Aurora will use its Silicon Photonics technology, a new non-volatile memory architecture, and advanced file system storage using Intel Lustre software.

The new HPC scalable system framework is designed for performance, but equally emphasizes energy efficiency. With over 50,000 nodes, more than 150 petabytes of storage, and peak power consumption of 13 megawatts Aurora will be six times more energy efficient than the current Argonne National Lab MIRA supercomputer, according to Intel. MIRA, an IBM BlueGene/Q supercomputer currently has peak performance of 8.58 petaflops, placing it at number 5 on the Top500 list.

"Argonne's decision to utilize Intel's HPC scalable system framework stems from the fact it is designed to deliver a well-balanced and adaptable system capable of supporting both compute-intensive and data-intensive workloads," said Rick Stevens, associate laboratory director for Argonne National Laboratory. "We look forward to collaborating with both Intel and Cray on this important project that will be critically important to U.S. high-performance computing efforts for years to come."