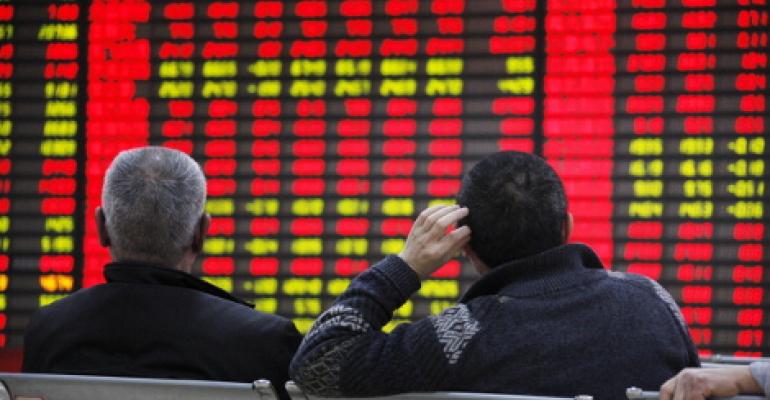 Investors watch the electronic board at a stock exchange hall in Huaibei, Anhui, China. (Photo by ChinaFotoPress/ChinaFotoPress via Getty Images)
Blades

Juniper Networks today advanced the convergence of network switches and servers with introduction of an offering that serves to embed a micro server inside a 40G Ethernet switch.

Andrew Bach, chief architect for the financial services team at Juniper, says the company is combining Intel Xeon processor E3-1125C v2 and Broadcom switching silicon in a QFX5100-AA switch that can be deployed with a QFX-PFA module based on the Altera multi-100G field-programmable gate array (FPGA).

End goal of the server on switch, says Bach, is to make it possible for developers to take advantage of FPGAs to write applications that can be deployed as close to the network switch as possible.

There is increased interest in data center applications for FPGAs because they can be reprogrammed to optimize for different workloads. The latest servers Microsoft designed to support its cloud services support FPGAs. Intel has developed a hybrid server chip that combines its Xeon E5 CPU with an FPGA.

Bach says that in time he expects to see both new classes of applications being developed for the server on switch as well as the movement of existing applications running on dedicated servers to the switch itself. Particularly in the financial services industry there are applications involving financial feeds that are going to be processed faster by being processed as close to the network switch as possible.

Bach notes that networking environments are already well on their way to becoming programmable. Once the networking device itself becomes programmable, a natural evolution will result in more application logic being deployed closer to the switch, says Bach.

In general, providers of network switches are increasingly engaging in a battle for the hearts and minds of developers. Instead of assuming that all application logic will automatically be deployed on a server, vendors such as Juniper are making the case that the cost of FPGAs has fallen to the point where it makes sense to use those processors as an alternative to general-purpose processors which can’t be as easily customized for specific types of applications.

In the case of Juniper, the FPGAs are being provided along with a dataflow programming environment created by Maxeler Technologies. The switch itself runs the vendor’s Junos operating system and can be integrated with Junos Space Network Director.