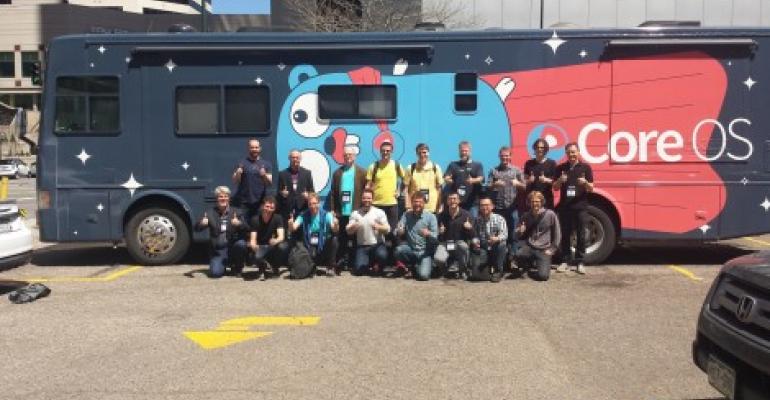 The CoreOS bus and crew at GopherCon, a conference for developers who use Go, the language etcd was written in. (Photo: CoreOS)
Business

CoreOS, a startup that provides a Linux distribution for massive-scale data centers, has received $12 million in funding from Google’s venture-capital arm and unveiled Tectonic – a combination of its OS and related tools and Kubernetes, the open source Linux container management system created by Google.

While it isn’t technically the first commercial product by the San Francisco-based startup, Tectonic is what it has been working toward since its founding and what company leadership expects to be its main source of revenue. The firm came out if stealth in 2013.

All the major components are now in place, he explained. They include its Linux distro, etcd, the CoreOS-made cluster-management tool that’s used in Kubernetes, Kubernetes itself, and Rocket, a container runtime built by CoreOS.

While Kubernetes has been used primarily for Docker containers, it now also has some support for Rocket and will have more in the future, Polvi said.

The initial Rocket announcement late last year caused a stir. Announcing it in a blog post, Polvi said the company had built an alternative format for Linux containers that addressed what he said were fundamental security flaws in Docker, the darling of the container world. Docker’s leadership and supporters responded furiously.

Polvi’s defense was that his post had been misunderstood as an attack on Docker, when all his company was trying to do was solve an engineering problem.

As of now, Tectonic has pieces of both Docker and Rocket. “Technically you need both in the system as it stands today,” Polvi said.

Docker will always be a tool people use to build container images, he explained. CoreOS has no intention to replace the container-build portion. He maintained that Rocket was built to address Docker’s security challenges.

A set of early customers are now previewing Tectonic, which will be the complete solution that realizes the startup’s vision of bringing Google data center infrastructure to everyone else. Polvi declined to talk about pricing, leaving that until the product goes into general availability. He expects to start shipping it sometime in the second half of the year.

An investment from Google “indicates that Google Ventures feels we’re best-suited to bring this type of computing to companies,” he said. Google has not tried to impose any restrictions or changes on the company’s roadmap as part of the arrangement.

The solution is aimed at smaller cloud service providers, Fortune 500 companies with internal infrastructure needs, as well as independent software vendors. The one thing all of these customers have in common is “they’re building software in house of some sort,” Polvi said.

“All of our customers are building and deploying software into their infrastructure in some way.
That’s what they all share.”