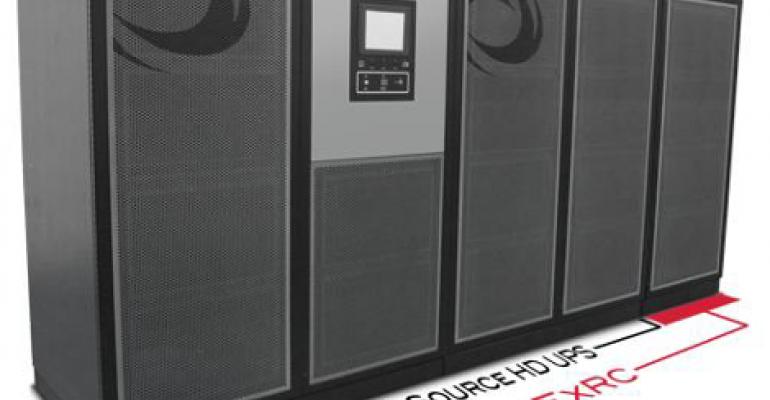 By adding a battery cabinet, Active Power can add 15 minutes of UPS runtime when necessary, but the flywheel is still the main workhorse (Image: Active Power)
Business

Active Power, the uninterruptible power supply vendor whose entire business has been revolving around its flywheel energy storage technology, has released a UPS add-on that augments the flywheel with batteries for those users for whom the 15-to-30-second runtime the flywheel provides is not enough.

While data center UPS vendors have been engineering for longer runtimes, the general trend in the data center industry is toward shorter windows, according to Active Power’s own review of specs it received from customers over the past 15 years. If in the early 2000s customers generally wanted 30 minutes of UPS runtime, they are often asking for less than one minute today.

There are multiple reasons for this trend, but the main one is cost, Todd Kiehn, senior director of product management at Active Power, said. A data center UPS that provides 15 minutes of runtime can cost three times more than one that provides only 5 minutes but has little effect on the window of downtime.

Another driver behind the trend, albeit a smaller one, is complete rethinking of traditional approaches to data center reliability by some of the largest companies. Instead of devising sophisticated data center power backup and automated failover systems, they rely on software-driven failover, Kiehn explained.

If one data center fails, another serves the workload. “And that requires a minute or two and not 5 or 15 minutes,” he said.

Some companies have found ways to get rid of the data center UPS altogether. Microsoft, for example, now builds mini-UPS into each server chassis instead of having a big central UPS system.

So why introduce a data center UPS that adds extra 15 minutes of runtime, when the market seems to be moving in the other direction? According to Kiehn, while the general trend is toward lower-cost systems with shorter runtimes, the size of the market that still wants 5 minutes or more shouldn’t be underestimated.

“A lot of customer are still asking for 5 minutes,” he said. They include colocation providers, financial services companies, as well as some enterprises.

For Active Power, this is about expanding the size of the market it can pitch to.

There are also reliability and TCO benefits to having both flywheel and batteries in the data center power backup chain. When utility power drops, the flywheel will react first and in most cases will never transfer the load to batteries, since the flywheel’s runtime is enough for a typical generator set to kick into gear, Anderson Hungria, senior UPS product manager at Active Power, explained.

Because the batteries are rarely used, initial and replacement battery costs are lower. Theoretically, it may also extend the life of the battery, but the vendor has not yet tested for that.

As two alternative energy storage solutions, the flywheel and the batteries act as backup for each other, making the overall system more reliable.

The optional battery cabinet comes with Active Power’s CleanSource HD UPS, a product that’s been on the market since 2012. The vendor also offers the option to use another flywheel UPS, called CleanSource DC as additional energy storage for extended runtime.

The package that includes the flywheel UPS and the battery cabinet costs more than a battery-only solution of equivalent capacity, but reduced initial and replacement battery costs will result in 3-to-4-year payback, according to the vendor.