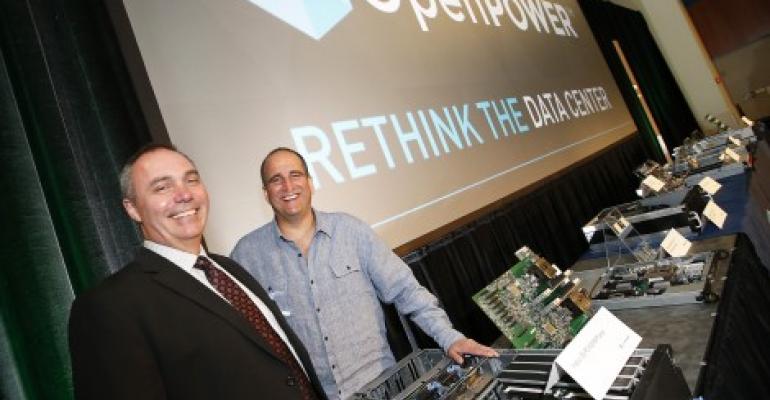 OpenPOWER is experiencing a lot of "firsts" this week. Indicative of the maturity and work happening around the POWER architecture, OpenPOWER Foundation members are unveiling more than 10 new hardware solutions spanning systems, boards, and cards, and a new microprocessor customized for the Chinese market.

The foundation licenses out IBM’s POWER platform, making POWER hardware and software available to open development. The hope is to enable unprecedented customization and new styles of server hardware for a variety of computing workloads. The flood of new "firsts" illustrates the growing need for customization.

Google, IBM, Rackspace, and Suzhou PowerCore are joining more than 100 other organizations from more than 20 countries to unveil new data center innovations that deliver an open alternative computing server solution at this week’s inaugural OpenPOWER Summit.

Last April, OpenPOWER held a “show-and-tell,” showcasing six solutions and two hardware examples. It received rave reviews. "I will tell you right now, both of those hardware examples have grown incredibly," Calista Redmond, director of OpenPOWER Global Alliances, said. "There are a couple of systems from Tyan that are impressive and Google will certainly speak for itself."

Some of the highlights include: the first officially available OpenPOWER server, first open server design combining OpenPOWER, Open Compute and OpenStack (the culmination of Rackspace’s efforts); a prototype of Firestone, another step closer to exascale; big development for OpenPOWER in China; and the creation of an advisory group that will encourage cross-pollination among the open communities.

"Last year was the 'tell me' year for OpenPOWER, and this year is the 'show me' year," Redmond said. "We have tangible products going out to customers from several partners. We’re starting to mature beyond a hardware show. Built around chip and architecture, we saw an early raft for optimization, memory, IO; and now we’re seeing maturity for workloads."

Rackspace has revealed a prototype of an open server design that exemplifies the type of work the new advisory group aims to promote. It combines OpenPOWER (architecture) and Open Compute (hardware) design concepts with OpenStack management: the trifecta of open cloud. The new design will be incorporated in Rackspace data centers.

As Rackspace has illustrated, interest in OpenPOWER goes beyond hardware vendors, extending to service providers.

The first commercially available OpenPOWER server comes from Tyan, one of the first partners in the consortium and the first with a customer reference system. The servers are designed for large-scale cloud deployments. Tyan TN71-BP012 will be available in second quarter 2015.

Chinese chip design company PowerCore introduced CP1, the first POWER chip for the China market. CP1 will be utilized by Zoom Netcom for a new line of servers called RedPOWER, the first China OpenPOWER two-socket system coming to market in 2015.

China is a huge (and growing) technology market, and OpenPOWER has made early in-roads with an emerging OpenPOWER ecosystem there.

"Any country that wants to grow their local economy using their own tech and thought leadership will have that possibility when they collaborate together with others," said Redmond. "For OpenPOWER, we look at China, we see a country that wants to feed that local innovation; that wants to build technology themselves and cultivate that center of knowledge."

As one of the OpenPOWER foundation’s newest members, Cirrascale is marketing the first OpenPOWER-based GPU developer platform: the Cirrascale RM4950. The company collaborated with NVIDIA and Tyan on the GPU developer platform, which is available now and shipping broadly in second quarter 2015. The platform supports development of Big Data analytics, machine learning, and scientific computing GPU applications.

The foundation announced the formation of the OpenPOWER Advisory Group, a formal mechanism for engaging with other open development organizations.

"Collaborating across our open development communities will accelerate and broaden the raw potential of a fully open data center," said Corey Bell, CEO of the Open Compute Foundation, in a press release. "We have a running start together and look forward to technical collaboration and events to engage our broader community."

The OpenPOWER foundation is growing, and now includes more than 110 members across 20 countries. OpenPOWER has grown from a potentially disruptive development alliance to one that is truly disruptive and each of its product announcements changes the competitive landscape. "We’re are no longer dependent on x86," said Redmond. "It's not changing the game; there’s a new game."