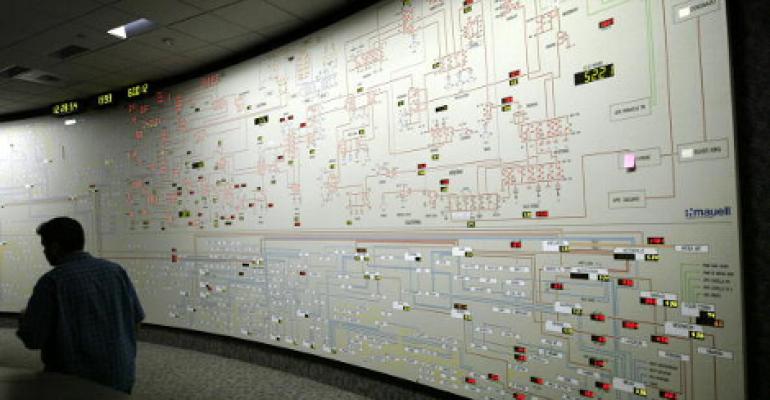 A figure passes the dynamic map board showing power distribution through California&#8217;s electrical grids in the control center of the California Independent System Operator. (Photo by David McNew/Getty Images)
Business

While customers don’t expect 100-percent uptime from an electrical utility, timely outage recovery is best a utility can do to keep users happy. Power companies have traditionally relied on Outage Management Systems – computer systems that help them do things like trace the source of an outage, decide what actions should take priority during restoration efforts, and manage their crews during outages.

Of course, outage recovery can never be done fast enough, so there is always pressure to find ways to speed up the process, and the utility industry is increasingly looking to big data analytics technologies for help. “There is growing interest in data analytics software in power grid restoration, especially in the wake of recent extreme weather events,” Keith Grassi, global product line leader for GE’s Digital Energy business, said via email.

Hurricane Sandy, the biggest example in recent history, left millions of customers in the U.S. Northeast, including numerous data centers in New York City, without power for days.

Fairfield, Connecticut-based GE, which ranks ninth on the Fortune 500 list, has been growing its focus on big data analytics over the past several years. From power and water, aviation, and healthcare to transportation and oil and gas, there are useful applications for analytics software across all of the industries the conglomerate sells into.

In 2013, GE invested about $100 million in Pivotal, becoming a minority stake holder in the software in the software company controlled by EMC and VMware that focuses on data analytics solutions for enterprises. That same year, GE launched a cloud platform for what it called the “industrial internet,” or a network of devices in factories and other large industrial facilities that generate data that can be used to manage those facilities more efficiently using analytics software.

The technology is not cheap. A typical utility should expect to pay from $1 million to $2 million for the solution, according to Grassi.

First phase of the software being installed in Colorado Springs provides reporting, but the next phase is going to include predictive analytics, Grassi said. On the backend, the software is supported by Oracle and Predix databases and a Geospacial server for circuit rendering. Future releases will employ Hadoop or similar technologies.