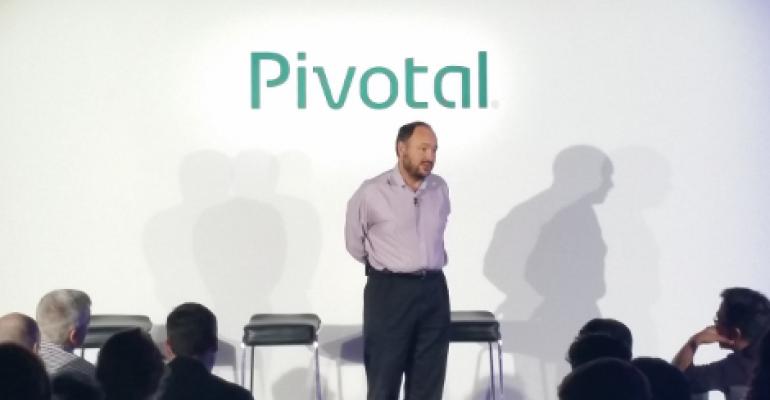 Paul Maritz, CEO of Pivotal, speaking at an event at the company&#8217;s San Francisco offices in February 2015 (Photo: Yevgeniy Sverdlik)
Internet of Things

More talent continues to flock to software company Pivotal, an EMC and VMware spin-off that is also widely known for having overseen development of the open source Platform-as-a-Service tool Cloud Foundry.

The latest addition is Benjamin Black, a former Amazon and Microsoft engineer who kick started the idea for Amazon Web Service’s (AWS) compute cloud piece, EC2. Black will run an Internet of Things-focused lab, aiding in the development of tools that help businesses handle the data flood from an everything-connected world.

EC2 is largely credited for revolutionizing the tech industry as a whole, given all the cloud initiatives spurred by AWS’ success.

"Pivotal brings together a strong data platform, the best open source application platform and an incredible organization for teaching customers how to build great software," wrote Black via email. "That alone is attractive enough, but under the leadership of Paul Maritz, Rob Mee and Scott Yara it becomes irresistible. No other company has that combination, and it shows in the business results Pivotal produced last year."

Black is focusing on the Internet of Things because he believes it's the nexus of where technologies are headed.

"Looking beyond all the hype, it is hard to imagine we are not seeing a major shift," he said via email. "It’s obvious to many in the industry the technologies and experiences that emerge over the next decade are going to be sophisticated and surprising, ordinary and futuristic. Much of that will be what is being called the Internet of Things."

Scale is a common theme among all the areas of technology Black has explored.

"IoT promises to dwarf the scale of everything that has come before, on every axis: number of devices, amount of data (volume, velocity and variety), and breadth of applications. Everyone and everything on the planet is or will be touched by IoT,” he said, adding that this quote by Dennis Gabor, 1991 winner of the Nobel Prize for physics, has rarely seemed as relevant as it is today: “The future cannot be predicted, but futures can be invented.”