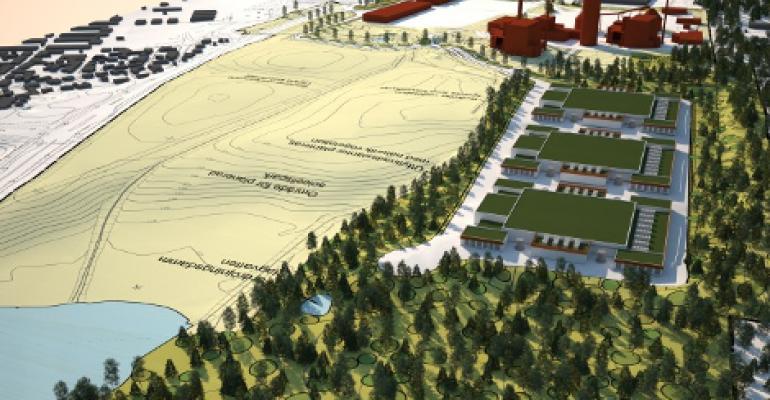 Exactly one week ago we reported on a “CO2-negative” green data center project that was in the works in Sweden. Nothing besides a YouTube video was available at the time, since the project had not been officially announced.

Some more details emerged earlier this week, however, from a press release by Schneider Electric, the French energy infrastructure and automation giant that’s one of the data center industry’s biggest vendors. Swedish utility Falu Energi & Vatten itself is behind the project, in partnership with a company called EcoDC AB, which was apparently formed specifically to participate in the project. Schneider will be one of the vendors providing infrastructure components for the future data center.

The project is unique in that the future data center will be fully integrated with the local energy grid and the central district heating and cooling system in the City of Falun. It will be powered by a mix of solar, wind, and hydro power, and will also take advantage of the utility’s co-generation plant, which converts woodchips, sawdust, and discarded wooden furniture into energy.

More and more data center operators are spending time and resources on powering their facilities with renewable energy.

There is some forward movement on renewable energy on the multi-tenant data center side of the market. Data center service providers are beholden to their customers’ wishes, and most data center customers appear to care little about powering their servers with renewable energy, according to a recent survey by Wyoming-based provider Green House Data.

There is however at least some demand for renewable energy in multi-tenant facilities. Digital Realty recently rolled out a renewable energy program for its tenants around the world, and so did IO. Both providers said they were driven to add the renewable option by customer demand.

The future green data center in Sweden will use free cooling for most of the year but will also get cooling capacity through excess heat energy generated by the co-generation plant. It will push server heat to the central heating system, contributing to the city’s comfort heating capacity.

In a statement, Falu Energi CEO Bengt Gustafsson said the data center’s integration with the city’s district heating system will reduce potential CO2 emissions enough for the facility to have negative carbon dioxide footprint. “We are connecting the data center to an already sustainable energy system and can make use of all the energy,” he said.

This will be a large, high-capacity data center campus. Its three buildings will total about 250,000 square feet, and its total power capacity will be 18 megawatts.