Companies and government agencies in developed markets are building fewer data centers overall, but that decline is being offset by growth in emerging data center markets.

That’s according to a recently published survey by market analysts from 451 Research, who said the number of data centers in North American and European data center markets declined 1 percent and 2 percent in 2014, respectively, while Asia Pacific, Latin America, and the MEA region (Middle East and Africa) all saw 2 percent growth rates year over year.

Overall, there were about 4.3 million data centers worldwide as of the fourth quarter of 2014, according to the report. That was 0.2 percent higher than at the same time the previous year, making for a weak growth rate.

Analysts at 451 attribute the low growth rate primarily to a decline in demand by traditional enterprises in the established markets. Demand for data center space from multi-tenant data center, cloud and IT service providers, however, is booming, and the boom is enough to offset the decline in the enterprise data center market.

By square footage, 83 percent of all data center space is controlled by enterprises. Multitenant data centers contribute 12 percent of the total, while cloud providers account for 5 percent. 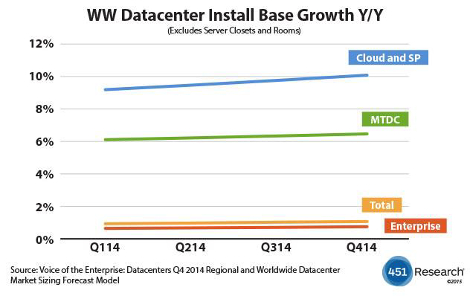 The overall trend, however, is toward fewer but larger facilities. A 2014 study by IDC made a similar conclusion. The IDC study also predicted that by 2018, mega data centers by service providers would account for more than 70 percent of all data center construction.

Hyperscale data centers grew 4 percent in 2014, led primarily by demand from cloud and service providers, according to 451.

In addition to the continued outsourcing of in-house data center capacity to specialist providers, another trend working against growth in enterprise data center space is increasing IT hardware efficiency. Companies are able to do more with fewer boxes, so they need less space to house their infrastructure.

“The bright spot for facilities vendors being that those cloud and MTDC (multi-tenant data center) providers will need to accommodate the growing demand for outsourced IT resources with their own facilities, albeit fewer and more efficient ones,” Daniel Harrington, research director for enterprise data centers at 451, said in a statement.