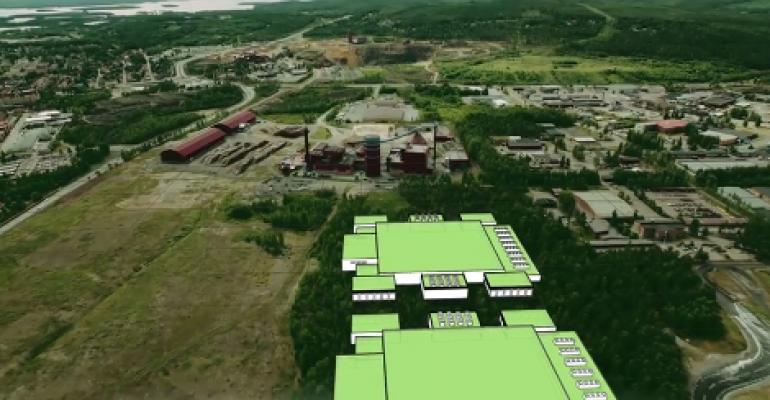 The EcoData Center would get some of its energy from a biomass-fueled co-generation plant that serves the local utility grid (Image: EcoDataCenter promo video)
Energy

‘CO2-Negative’ Green Data Center in the Works in Sweden

Facility to get energy from biomass-fueled co-generation plant, contribute to district heating and cooling systems

An organization called EcoDataCenter is pitching a green data center project in Sweden that will be powered by a co-generation plant that burns things like wood chips and old furniture, heat homes with server exhaust heat during winters, and contribute cooling energy to a district cooling system during warm seasons.

It is unclear who is behind the project in the City of Falun, known for a big copper mine that was operational until the early 90s. A promotional video that describes the project and claims it will be “CO2-negative” was posted on YouTube today, but access to the official EcoDataCenter website is blocked.

Business Sweden, an economic development organization, is promoting a Falun site owned by the local electrical grid operator for data center use that has similar attributes as the project described in the video.

The site can accommodate more than 430,500 square feet of building and has immediate access to 16 megawatts of power, with a substation already in place. It also has dark fiber.

It has access to the local district cooling system, but the climate allows for free cooling from October through April, according to Business Sweden.

Recycling server heat for comfort heating is generally considered an inefficient practice, but the economic development org says the Falun site would be an exception, because proximity of the district heating infrastructure will make the cost of building the system for pushing heat from the data center to the district system will be lower than usual.

Finally, the site can also receive energy from a nearby solar farm.

The green data center described in the EcoDataCenter video would be fully integrated into the city’s utility systems, including district heating and cooling.

Combined, the co-generation plant and local solar and wind farms provide more than half of the municipality’s energy needs. The rest comes from “other renewable energy sources,” including hydro, the video states, without elaborating what those other sources are.