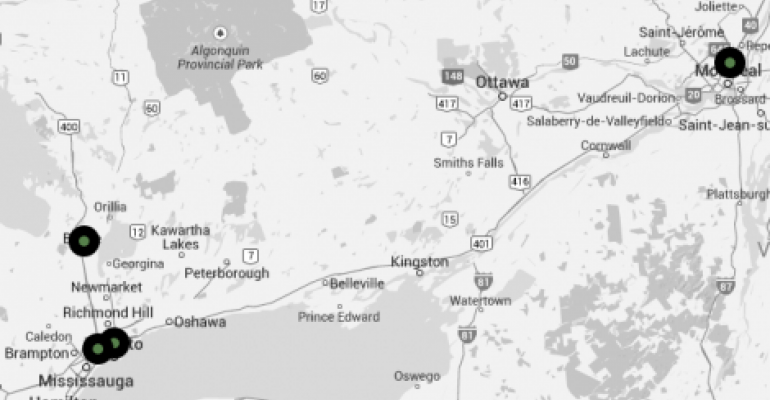 Canada’s Cogeco Data Services said it will open a new 100,000-square-foot Montreal data center this spring. This will be the fifth data center of the major Canadian telco and media company's subsidiary.

The new data center will be in Kirkland, an on-island suburb, and is described as being the size equivalent of 12 NHL-sized ice surfaces. CDS footprint is all in Canada, its total data center capacity totaling over 200,000 square feet. It has three facilities in the Toronto metro and one in Barrie, Ontario.

Cogeco is one of many big cable companies with growing data center businesses. CDS was formed in 2008 following an acquisition of Toronto Hydro Telecom, which provided a lot of its Toronto infrastructure, and renamed that same year. It later acquired and integrated Quiettouch and MTO Telecom, a Montreal private telco and fiber network, under the CDS name.

Parent Cogeco made a big acquisition in 2012, acquiring Peer 1 for $635 million , which formed a separate Peer 1 Hosting division. Tony Ciciretto is president and CEO of both CDS and Peer 1.

"We are very excited to add another advanced facility to our growing data center footprint,” Ciciretto said in a statement. “The new center is specifically designed to meet an increasing demand in the Montreal region for reliable and secure ICT solutions.”

Montreal is a sizable Canadian city and data center market, along with Toronto, Ontario, and Vancouver.

It features relatively low-cost clean hydro power and great connectivity to New York, Toronto, and Europe. Despite all of the prerequisites, the Montreal data center colocation market hasn't grown as fast as in its Canadian counterparts, and pricing has been occasionally soft. However, the factors listed above, growing comfort with outsourcing facilities, and data privacy needs are all contributing to data center growth.

In Montreal, other colocation and hosting providers include CenturyLink, Cologix, OVH which recently added a 10,000 server container, and iWeb, which was acquired by Internap in 2013 but maintains the iWeb branding.