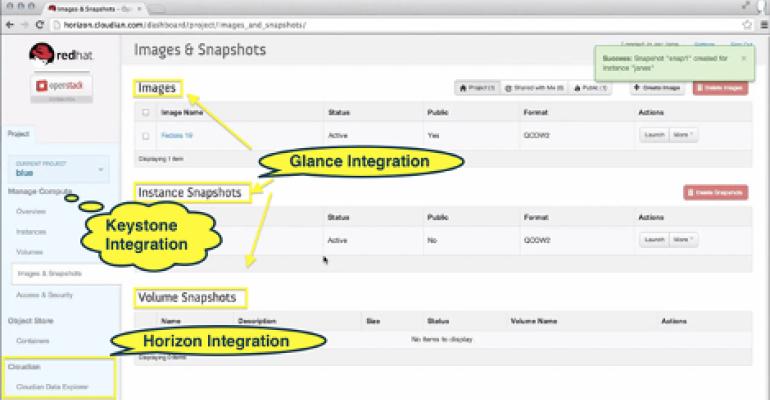 Cloudian has made its platform for data storage Hadoop-ready with a Hortonworks certification. The latest 5.1 release of Hyperstore also includes enhancements for distributed and hybrid storage, such as better security and geo-replication enhancements to enable real-time access to metadata across multiple sites.

Making Cloudian's storage Hadoop-ready means customers can now run analytics in place, directly against the company’s storage system without having to extract the data.

Cloudian wants to disrupt traditional storage. Its initial focus was on delivering low-cost storage on commodity hardware. It has expanded functionality to create what it calls a “smart” storage system that can run on commodity hardware. “People want a storage platform that’s a bit more horizontal with multiple use cases,” said Cloudian Chief Marketing Officer Paul Turner.

To achieve Hortonworks certification, Cloudian’s system underwent a battery of tests. Down the line, Turner said, the company will support multiple Hadoop distributions. Hortonworks was selected as the maiden voyage because of its leadership position.

The Hadoop vendor had its Initial Public Offering in December in a strong debut. It has been focusing on partnering in addition to making Hadoop more secure, most recently deepening its relationship with Talend around stream data analytics.

The two major current trends in storage, according to Turner, are smart storage and general hybridization of storage by enterprises. Companies are employing both private and public, depending on the data, and there is a split occurring between high-performance data and bulk data.

“There is a convergence of big data and analytics,” said Turner. “You can’t just have a storage system to hold data. There’s usually a lot of capacity data I want to run capacity analytics on; you don’t want to only store, you want to analyze.”

Not all data is created equal, leading to the second trend, hybrid storage. “People are truly looking at hybrid, at which data goes to the cloud, archive or backup to the cloud, long-term retention,” said Turner.

As businesses become more geographically dispersed, a storage system needs to handle more responsibilities. Those responsibilities include file distribution and sharing, tiered storage, and storage for private cloud. Turner said Cloudian can act like a private Amazon S3 but on-premise.

Two big verticals that use Cloudian are financial services and media. Examples of use cases include media content storage, advertising in need of distributed feeds, and distribution of content around the world.

Cloudian runs on appliances or software, though appliances make up the bulk of the business.

“Enterprises want out-of-box solutions,” Turner said. “The world went through a shift; first it went to appliances, then it was software-defined everything. But I think reality is enterprises want all the flexibility from software defined (abstraction, API dynamic control, keep it open). What they didn’t like about the closed systems (NetApp, EMC) is they couldn’t take control of things.”