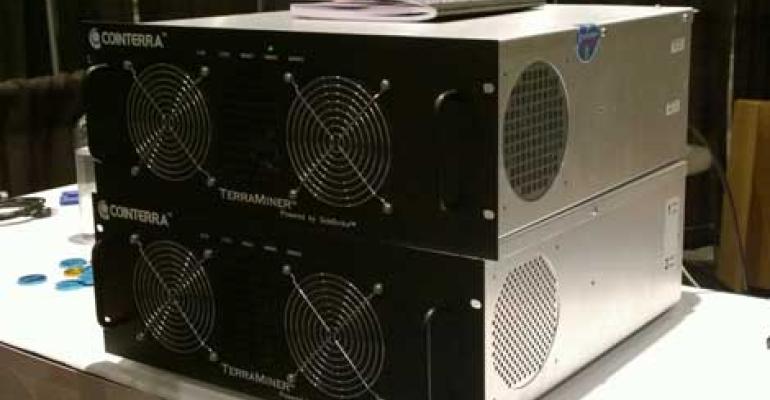 What the Bitcoin Shakeout Means for Data Center Providers

Some bitcoin mining firms are shutting down or halting payouts to customers, while others are shifting their business models. The fallout is being felt by data center operators who leased space to large mining operations.

There's a major shakeout underway in bitcoin cloud mining, with some firms shutting down or halting payouts to customers, while others are shifting their business models.

The fallout is being felt by data center operators who leased space to large mining operations, prompting one provider to sue a bitcoin customer for millions of dollars in unpaid hosting costs.

The turmoil is driven by an extended slump in the value of bitcoin and other virtual currencies. After soaring as high as $1,100 in late 2013, the price of bitcoin has plunged, hitting a low of about $225 on Tuesday.

This decline has wreaked havoc with cloud mining operations, who lease processing power to users. Many of these companies operate their own warehouse-style computing facilities, but some providers lease data center space from wholesale providers.

On Monday, C7 Data Centers filed suit against mining company CoinTerra, which has missed $1.4 million in payments. The suit seeks up to $5.4 million in damages, citing C7's costs for provisioning power and the balance of CoinTerra's contract. CoinTerra disputes the charges and says it has filed a counterclaim.

CoinTerra CEO Ravi Iyengar told us the company has defaulted on its debt as a result of C7 shutting down CoinTerra's infrastructure at its data centers. As a result, the bitcoing miner has halted operations and stopped payouts to its customers.

CoinTerra is also a major customer of CenturyLink, which has leased more than 10 megawatts of data center capacity to the mining firm. Its servers at CenturyLink data centers have also been shut down.

The Downside of Speculative Mining

Bitcoin mining has always been a speculative business, offering a way to mint digital money with high-powered hardware by processing transactions, with financial rewards paid out in virtual currency (hence the “mining” nomenclature). The network is based on a public ledger known as the blockchain, with each transaction verified using cryptography.

Another mining company that has leased significant data center space is CloudHashing, now owned by Peernova. Customers have complained that the company is mining fewer coins and that payouts have become erratic.

"CloudHashing is very much operational," said Emmanuel Abiodun, president of Peernova. "We have simply pointed our mining machines to a larger mining pool to increase the block discovery frequency which is a good thing for all customers. The growth of the bitcoin network made that decision absolutely necessary. Customers will now be paid on a weekly schedule."

Peernova, like other companies in the ecosystem, has been changing its strategy. In December the company said it had raised $8.6 million in new funding and would use the money to accelerate its development of blockchain-based software products for enterprises. "A large amount of our efforts this year will be delivery of these applications," Abiodun said.

Another firm that has shifted its business focus is GAW Miners, which made a major push into cloud mining last summer. The company recently launched its own virtual currency called Paycoin, and some customers who continue to mine using GAW's cloud-based "hashlets" say their maintenance fees can exceed the returns from mining.

The turmoil has been felt most acutely among smaller players in cloud mining. Over the past month, a growing list of companies have either halted their cloud mining operations or curtailed payments to customers, including ZeusHash and PB Mining. In perhaps the most bizarre development, cloud mining service Hashie suspended operations and temporarily replaced its web site with an "alternate reality game."

The chaos makes the risks of the bitcoin sector stark. As we noted in July, the sector presents a challenge for the data center industry. As demand for bitcoin mining capacity soared in early 2014, some providers leased significant amounts of space and power to bitcoin specialists, while others skipped these deals, wary of the density requirements, economics and potential credit risk.

“Some investors don’t want to touch the Bitcoin industry,” data center industry veteran Mark MacAuley, a managing director at RampRate, said at the time. “The risk is outside the profile that’s palatable to some investors."

Credit risk is not a new issue for the data center industry, which was hard-hit by the dot-com bust and the collapse of speculative startups. The wave of dot-com bankruptcies rippled through the colocation sector, leading to the collapse of major players like Exodus Communications, AboveNet, and MCI WorldCom.

As the industry recovered, data center providers tightened their credit standards and limited the scope of their construction projects, seeking to keep the supply of space in line with customer demand. After a lengthy period with few customer default problems, the industry's appetite for risk has been tested by the bitcoin sector.

Click below to continue to page 2 of this story

Warehouses Ride Out the Storm

As we noted in the early days of the bitcoin boom, mining infrastructure is split between data centers and no-frills hashing centers featuring high-density hardware and low-reliability power infrastructure, often housed in former warehouses.

Advocates of the hashing center model say low-cost infrastructure is critical to riding out volatile shifts in the the bitcoin sector. Chief among them is Dave Carlson, the founder of MegaBigPower, who predicted that warehouse-based operations would prove a competitive advantage in turbulent times.

“Most data center pricing models are not very applicable to the Bitcoin market,” Carlson said in October, when the price of bitcoin was $330. “The people who have signed up at data centers are getting squeezed (on operating margins). I’ll still be running when those guys shut off.”

"Bitcoin pricing does not affect us as much as other services, as we have relatively lower maintenance costs than the market," said Abiodun of Peernova. "You will see other services affected by this price slip. It will ultimately lead to a slower growth of the mining network, which we predicted in 2014."

The falling price of bitcoin has impacted CloudHashing's ambitions, however. "We have plans to grow our footprint this year," said Abiodun. "This is bitcoin-price-dependent, however."

Other mining industry executives say the relationship between price and competition has become unpredictable.

"Price is just one component of the puzzle," said Iyengar, CEO of CoinTerra. "The difficulty has gone up significantly, while the price has gone down."

On Tuesday the hashrate finally declined, dipping to 250 petahashes, presumably because the huge mining pool CEX.io suspended operations after the latest increase in difficulty made mining unprofitable.

"Pretty much all the mining companies are struggling," said Iyengar. "The mining industry is somewhere no one would have predicted six months ago. The model we all relied upon has collapsed."

Iyengar speculated that the disconnect was due to "irrational mining" by some large players, who are either operating at a loss or obtaining power at below-market rates.

Data Centers and Bitcoin: What Now?

Where does this leave the data centers that have focused on the bitcoin sector? That's an important question for firms like C7, which has about 4 megawatts of available space optimized for bitcoin tenants.

"We have seen a decline from previous demand," said Wes Swenson, CEO of C7. "We are not seeing as strong an increase with the newer-generation machines or startups as we saw with the previous generation of machines or startups. Perhaps the exchange price and increasing computational difficulty is keeping a lot of the prospectors out of the market."

Swenson believes that opportunities still exist in the bitcoin sector, but said that market conditions have narrowed the workable scenarios. C7 has designed space optimized for cost-conscious bitcoin clients. But with the price of bitcoin hovering near $225, profitability is elusive. One option is to focus on the times when electricity is cheapest.

"We can offer an off-peak product for miners in this N inventory, allowing them to mine in off-peak hours in the winter and summer at about 50 percent of the cost per kW," said Swenson. "They get less operating hours, but the hours in which they operate are generally a 50 percent to 60 percent margin between the colo cost, and the mining revenue. If the miners could operate in off-peak hours it would be extremely advantageous, and we have a product that will allow them to do that."