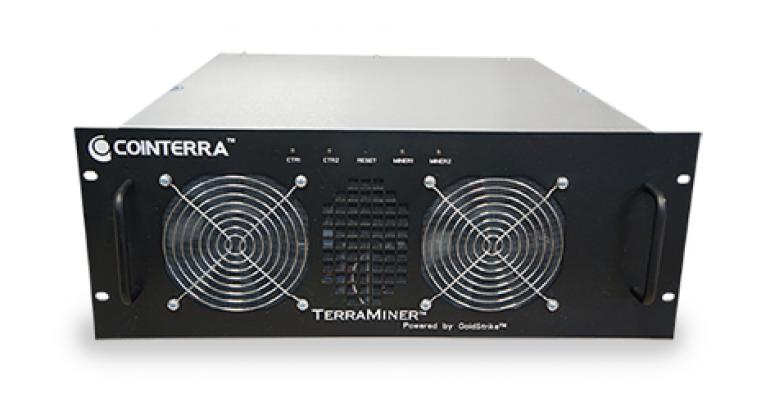 A rack of CoinTerra&#8217;s TerraMiner servers for bitcoin mining can take as much as 25 kW of power. (Photo: CoinTerra)
Colocation

C7 Data Centers has filed a lawsuit against its customer CoinTerra, a provider of bitcoin mining services. The customer has allegedly not been paying its bills for services it has been receiving from the Bluffdale, Utah-based data center provider.

The lawsuit, in which the plaintiff is seeking to recover about $5.4 million in damages, comes at a difficult time for all players in the bitcoin ecosystem. The digital currency’s value has been falling steadily since hitting a high of nearly $1,200 at one point in 2014.

It is currently below $280, prompting one cloud mining service provider, CEX.io, to halt mining altogether, saying it was no longer profitable. The company’s CIO Jeffrey Smith told CoinDesk that it will start mining again if the price exceeds $320.

The Redditor pasted a statement they received from CoinTerra’s legal department, saying the company had defaulted on debt, and that its lenders had liens on all of its assets, including servers.

CoinTerra has been a C7 customer since April 2014, using its colocation, hosting, monitoring, and management services. The 18-month contract is for services in three separate C7 data centers, according to summary of the allegations in the lawsuit.

As of early December, CoinTerra’s past due balance was about $1.4 million, but C7 is seeking $5.4 million or more in damages, which includes total cost of services for the duration of the contract and other damages.

“Upon information and belief, CoinTerra chose to pay C7 less than the amounts due in bad faith,” the allegations read.

CoinTerra CEO Ravi Iyengar did not return a call seeking comment in time for publication. We’ll update this post once we hear back from him.

Power is the biggest cost of providing data center services. C7 said it has been paying more than $12,000 per day just to supply power to CoinTerra. C7’s latest invoice issued to the client was for about $430,000, and about $350,000 of the total was for electricity.

The data center provider also claims it has incurred losses by turning down other potential customers to accommodate CoinTerra’s needs.

C7 is not the only data center provider CoinTerra uses. CenturyLink Technology Solutions announced in July 2014 a big colocation deal with the bitcoin mining company. Iyengar told Data Center Knowledge at the time that the deal was for north of 10 megawatts of capacity.

A CenturyLink representative declined to comment, citing confidentiality of the contractual agreement between the two companies.