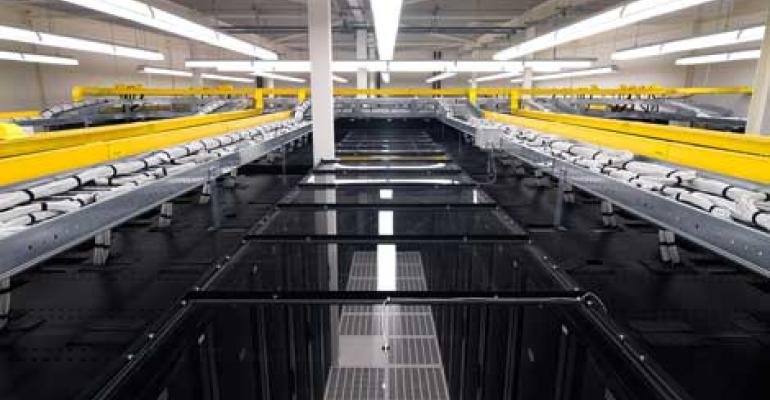 A look at overhead containment in an Interxion data center. The company has committed to both renewable energy and increasing efficiency within the data center (Photo: Interxion)
Business

Renewable Energy and the Colocation Provider

With high profile 100 percent renewable energy commitments on the part of Apple, Google, Microsoft, what is the colocation provider's role when it comes to renewable energy?

Hyper-scale data center operators like Google, Amazon Web Services, and Apple have been very public about their renewable energy usage and commitments. It's good for the environment and it makes people look upon them favorably. However, these operators contribute only a small fraction (think around 5 percent) of overall data center energy usage. The multitenant market is driving data center growth, but what is their role in terms of renewable energy?

Data centers (big and small) consume around 3 percent of energy in the U.S. They consumed an estimated 91 billion kilowatt-hours of electricity in 2013, with annual consumption projected to increase by roughly 47 billion kilowatt-hours by 2020, according to the National Resources Defense Council (NRDC). For the common person on the street, this can be alarming.

Greenpeace and the NRDC have both targeted data center energy usage. Greenpeace has primarily targeted the large hyper-scale clouds and the type of energy they use (though multi-tenant providers were assessed somewhat harshly in the most recent report card). The NRDC recently argued that colocation providers are particularly inefficient on the inside.

Do colocation providers have the same responsibility when it comes to renewable data center energy, and should they be held to the same standards as an Apple or Google? Yes and no. The Googles and Facebooks of the world have the sway to effect real change on the grid, recently lobbying Duke Energy to commit $500 million to renewables.

A colocation provider's options are less flexible, due to efficiency, limited space, and limited flexibility in site selection. But its sway could affect the grid in the future. Currently for many, buying Renewable Energy Credits is the only way to go, though this practice isn't quite pervasive outside of the mega providers like Interxion and Equinix. Due to their business model, impactful change is more often made within the data center through achieving high efficiency.

For Colos, Location Matters a Lot

Bob Landstrom, director of product management at Interxion, said the European colo provider focuses on efficiency and has a 100 percent renewable goal in place. The latter is more challenging than the former.

Facebook has more freedom in terms of site selection as it provides a service it can deliver from a place like Oregon. Colo provider location choices are heavily dictated by the market. Locations they have to be in usually don't have enough space to install solar panels or gas turbines.

“Colocation facilities go where the customers want them to be, where the richest connectivity is present," he said. "This often means cities tight on space. If you have a data center in Manhattan, London, Paris, you can’t erect a wind turbine. You might have only roof space, and that is often dedicated to something else – DX units, chillers, sometimes even generators.”

Led by Interxion Chief Engineering Officer Lex Coors in Amsterdam, the company places a lot of focus on efficient design. Some of the more publicly known innovations are using seawater for cooling in Stockholm and being an early adopter of phased build-out and cold-aisle containment. The company also helps customers install equipment in a way that optimizes airflow.

Interxion introduced its Energy Strategy Group about a year ago. One of its functions is to consolidate the purchasing of energy. “It can be a challenge to have a consolidated approach to how energy is procured,” said Landstrom. The company operates in 11 countries, and each one is very different. Some are regulated, some not, some are more mature than others.

The group is responsible for understanding energy prices and sources, and for making wise energy procurement choices that consider the company as a whole. It works with site operations and sets energy efficiency improvement targets.

The company has successfully offset its carbon footprint and achieved 100 percent renewable energy in all but one market: Germany. Reaching the goal isn’t feasible in Germany yet, though the country is progressive in its thinking, Langstrom said. “They’ve made a commitment to turn off nuclear power over the coming years, and recently made an announcement for coal power plants. At the same time they’re the fastest-growing economy in Europe. It’s quite an interesting dynamic going on in the country.”

Data center operators consume a ton of energy, but they are subjects to larger forces when it comes to renewable energy decisions. As colocation grows, however, there’s a chance it will be put under the same scrutiny as the hyperscale clouds.

"When it comes to the bigger picture of the reduction of global greenhouse gases, we have to look at all sides of the equation," said Landstrom. "We have to talk about how the energy is created in the first place – governments have a role to play in this regard. They have to improve innovation and sustainable energy, and influence how the energy markets work. Today, it’s cheaper for an electricity power plant to burn coal than gas, even though gas produces less CO2. Who can impact that? Not the data center operator."

The general public might view colocation as industrial energy vampires, but what occurs within the walls is as necessary as the utilities themselves. Servers are the engine behind the economy. Business can’t stop using computers, and it would be massively inefficient to host everything in non-optimized server closets on premises.