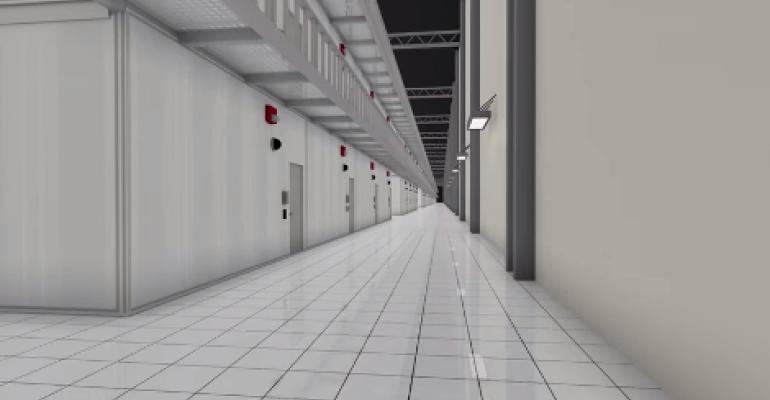 A look down a corridor inside the future Keystone NAP data center in Pennsylvania (Screenshot: Keystone NAP video tour)
Business

Keystone NAP is building out a data center at the site of a former steel mill in Bucks County, Pennsylvania. Commissioning is scheduled to be completed in Q1 2015.

The steel mill, which will soon be converted into a data center building, was constructed over 60 years ago and was once the largest vertically integrated steel production site in the U.S. Steel production slowed, but the massive power infrastructure remained. The company is tapping this power infrastructure and combining it with modular building through a partnership with Schneider Electric.

The goal is to bring a web-scale data center to enterprises, as well as to serve web-scale companies themselves. “Take a look at what companies like Amazon, Microsoft, and Facebook are doing at scale,” said Keystone NAP CEO Peter Ritz. “These are billion dollar projects. Keystone wants to bring that kind of discipline and efficiency to the enterprise. The reality is with enterprises, because it’s not their core business, it’s very difficult to do at scale."

Bucks County is an hour drive north of Philadelphia. The market is underserved, but Bucks County and Philadelphia are in a good intermediary position between several core data center markets.

"We are seeing growing demand for data center space in the Northeast, and particularly in eastern Pennsylvania, as an alternative to markets such as New York and New Jersey," said Kelly Morgan, research manager for data centers at 451 Research. "With its location outside of Philadelphia, as well as its combination of space, power, and application management services, we expect that Keystone NAP will see strong demand for this new facility."

The company received Series A funding and is backed by prominent Philadelphia investors led by Ira Lubert along with additional investors arranged by DH Capital.

Lubert previously was an owner of NAP of the Americas, the massive data center building in Miami that ended up selling to Terremark (which is now part of Verizon).

Standing on the Shoulders of Giants

The modular approach the company is taking is nicely aligned with the capital plan, according to Ritz. “We thought that there was a tremendous opportunity at the site we selected to deploy this type of data center,” he said. "We’re standing on the shoulders of giants that used to be here,” he said, referring to the steel plant that necessitated a lot of deep engineering many years ago.

The project is similar to Steel Orca's proposed project a few years back, right down to the location. Keystone is aligning many concepts and innovations at the right time.

The company is currently converting the former steel plant’s motor room building. The steel mill used arc furnaces that would run from 300 megawatts from the grid. “And they used to run a couple of them,” said Ritz. "All of those engineers in the 50s might not have had supercomputers, but the site has never lost power since it was built; a remarkable thing.”

“We're providing fuel diversity,” said Ritz. "During the Hurricane Sandy situation that the Northeast, particularly New Jersey and New York, faced, it caused a lot of enterprises to say, ‘I don’t want to be dependent on diesel providers.’ Our way is to be so close to generation and be so diverse that that issue doesn’t come into play.”

In terms of cooling, the site has access to Delaware river and the water basin and aquifer that forms the base of the river in addition to normal air cooling.

The modules are quick to deploy and offer uninterruptible power up to 400kW per KeyBlock. Each KeyBlock is private allowing Keystone to provide custom Service Level Agreements.

Services Up the Stack, Beyond Facilities Management

In addition to standard facility management, Keystone will also provide "up the stack” application services and workspace recovery solutions. This includes transition services for helping a customer move into the data center and full responsibility when it comes to the network.

“As we looked at the landscape of data center operators, most come from real estate backgrounds,” said Shawn Carey, senior vice president of sales and marketing. “The underpinnings require a sophistication of running an application stack in a web-scale environment. We have a team and advanced services. It needs to be about more than just space and power.”

Early partnerships with Sunesys and Comcast deliver dedicated bandwidth to Keystone NAP through independent dual feeds on opposite sides of the campus. “We want to be on the hook for identifying bandwidth requirements and provisioning for building networks," said Carey.

In terms of workspace recovery service, there will be room for housing hundreds in case of a physical disaster like Hurricane Sandy. The facility is located within reasonable driving distance of all the major data center markets in the Northeast.