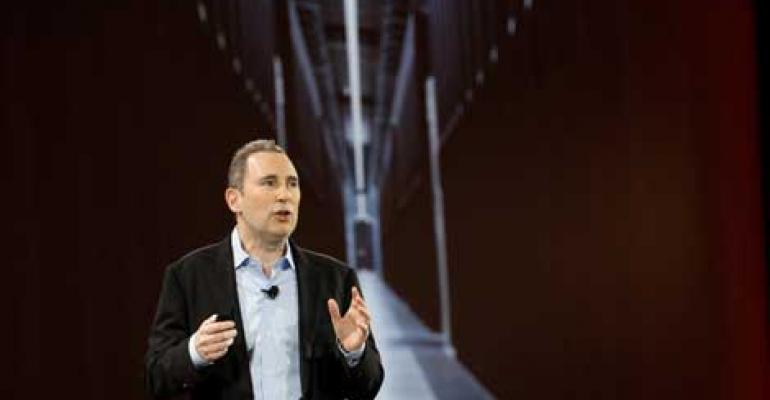 AWS announced several enterprise-class services retooled for cloud, as well as tools to make development and security less of a headache.

Amazon Web Services executives talked about making the cloud even more developer friendly and “consumerizing” many enterprise processes and tools in Wednesday's keynote at the company's re:Invent conference in Las Vegas. The theme was rebuilding traditional enterprise solutions and processes to capture the agility and speed of cloud, illustrating that AWS enterprise is a huge focus for the company.

Refreshingly, keynote speakers did not bring up cloud price wars, focusing instead on new services, which suggests that AWS is trying to move the conversation away from pricing and towards features. A recent Peer 1 study found that many customers were getting "confused" and "annoyed" by frequent price cuts.

The company also divulged some of its cloud usage numbers. AWS now has 1 million active customers and thousands of system integrators. The AWS Marketplace has 1,900 listings and customers run more than 70 million hours of software per month. Amazon’s deployment service, called Apollo internally, pushed 50 million deployments in the last 12 months.

AWS has a massive ecosystem of third-party service providers that offer solutions based on its cloud services, AWS delivering the core infrastructure, and the third-party providers packaging it with other features tailored for enterprise consumption. Now that Amazon is expanding its own value-add service portfolio, some of these providers may have to compete with the giant for business. Where providers can really differentiate now is hybrid and multi-cloud deployments, since Amazon’s tools are specific to Amazon.

Aurora is a relational AWS database built from the ground up. “Databases are still built around the mainframe mindset,” said Anurag Gupta, the product's general manager. “We started with a blank piece of paper. It’s a database built for AWS cost structure.”

It is built around Service Oriented Architecture and multi-tenant scale-out components and uses S3 and EC2, AWS storage and compute services, respectively.

It’s compatible with MySQL, but performs five times better, according to AWS. Customers can move data in or out of the database with a few clicks.

The big sell is that it is a commercial-grade database available for a fraction of the cost. The R3.large instance of Aurora is 29 cents an hour. It is five times larger than the largest MySQL RDS available, the company said, and can handle 6 million inserts per minute and 30 million selects.

Data in the new AWS database is continuously backed up to S3. It tolerates disk failures, and crash recovery takes seconds. Database cache survives a restart with no cache warming required.

Key rotation is so hard, many companies avoid it despite of the security benefits. To address this problem, AWS introduced a key management service, "consumerizing" a traditional enterprise process.

It lets the admin create, disable, view, and set policies. There is forced and automated key rotation and access visibility through AWS Cloud Trail. Cloud Trail logs and tracks all API calls to your account. It ties into several new products and has been expanded.

Another new feature called AWS Config provides full visibility into all AWS resources a user has deployed. It helps manage relationships between resources and predict effects of a change made in one part of the environment elsewhere.

AWS Config shows configuration changes by the hour and by the day. Everything is tracked in Cloud Trail, which acts like a homebase for several of these services.

Config follows a recent announcement of a tool by ScienceLogic that does similar mapping of interdependencies.

Forrester has named service catalogs “the cornerstone of service and delivery automation,” and enterprises have been asking for one from AWS for a long time, Jassy said. Now, one is coming in 2015.

It will allow admins to create a portfolio of products and make them easily discoverable. It will give them fine-grain access control to help meet compliance needs by department. Once again, all the activity will be tracked by Cloud Trail.

There were several other developer-friendly service additions. One of them, AWS CodeDeploy, presents a standardized way to deploy apps to AWS.

It enables simultaneous deployment of groups of instances, rolling upgrades or roll-backs, and automated deployment health tracking. It works with most programming languages and tool sets.

Another new feature, AWS Codepipeline, is a continuous build, test, and integration service based on technology used pervasively inside Amazon. It enables repeatable, automated integration.

Finally, AWS CodeCommit is a managed code repository in the cloud. It allows you to host code for stage, test, and production and integrates with GitHub, Chef, and Puppet. “This set of services is designed to work together,” said Jassy.

Examples of companies that have done that are publishing houses Conde Nast and Newscorp, and energy giant Hess Corp. Newscorp is changing from a 45-data-center infrastructure to one that combines six data centers and AWS.

Intuit is one of the latest big companies to make the move. The company chose to move to AWS rather than renew an expiring data center lease.

"Last year we did 10 acquisitions, and half were already running on AWS, making the integration that much easier,” said Tayloe Stansbury senior vice president and CTO of Intuit. This suggests that "born on" AWS companies continue to proliferate.