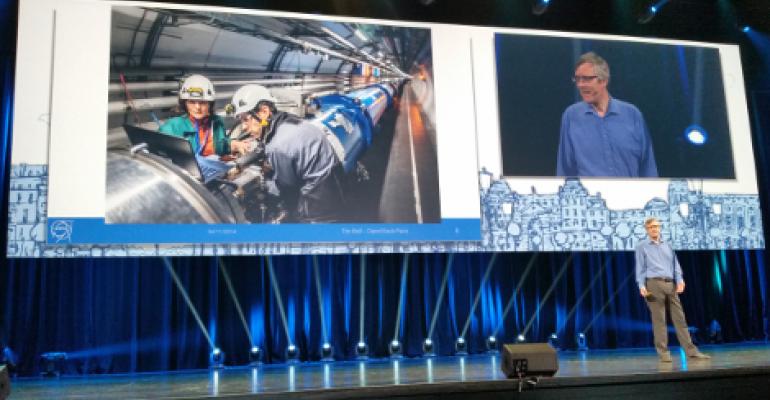 The team overseen by Tim Bell, infrastructure manager at CERN (pictured), is preparing to upgrade its OpenStack cloud from 115,000 to 150,000 compute cores to handle an increase in data that will be generated by the Large Hadron Collider when its energy is doubled in 2015.
Business

OpenStack Summit: As LHC gets upgraded to double its energy, computational power attached to the collider will have to increase as well

PARIS - Building the Large Hadron Collider itself was doubtless a massive feat, but the machine – a nearly 17-mile ring more than 300 feet underground on the Franco-Swiss border – is useless without the huge data storage and computing capacity needed to analyze the ungodly amount of data it generates when microscopic particles get recorded smashing into each other at extreme speeds.

That computational power at the European Organization for Nuclear Research (CERN) is delivered through four cloud environments the organization’s IT team created using OpenStack, the suite of open source cloud software that is quickly becoming the industry standard for building clouds. Tim Bell, CERN’s infrastructure manager who oversees that team, spoke about the organization’s cloud during a keynote at this week’s OpenStack summit in Paris.

CERN currently has four OpenStack clouds living in two data centers – one in Meyrin, Switzerland, where Bell’s office is located, and the other in Budapest, Hungary, a remote business continuity site for the primary Swiss facility. Largest of the four has about 70,000 compute cores on about 3,000 servers. The other three comprise a total of 45,000 compute cores.

Bell’s team started building its cloud environment in 2011 using the Cactus release of the open source cloud software. They went into production with the Grizzly release in July 2013. Today, all four clouds run the Icehouse release. Bell said he has about 2,000 additional servers on order to increase the cloud’s capacity since the upcoming increase in energy of the particle beams inside the collider mean it will generate more data than the 1 petabyte per day it already generates when running at its current capacity.

An OpenStack cloud is never built using just components of the OpenStack suite, and CERN’s cloud is not an exception. Other tools in the box (all open source) are:

Bell’s team recently devised a federated cloud system that currently works across CERN’s cloud and the public cloud resources by Rackspace, whose cloud is also built on OpenStack. Users can deploy federated identity across Rackspace cloud and CERN’s private cloud. In the future, Bell foresees more public clouds and other researchers’ clouds to be able to gel with CERN’s.

CERN’s OpenStack environment is already massive, and it is going to become even bigger when the collider is upgraded to double its energy in 2015 so scientists who have already used LHC to confirm existence of the Higgs boson (50 years after Peter Higgs and five other physicists theorized about the “God particle’s” existence) can continue looking for answers to some of the most fundamental questions about the universe. Why is gravity so weak? Are there dimensions we’re not aware of? Do gravitons, the currently hypothetical guardians of gravity, exist?

Those are things physicists worry about when they wake up in the morning, Bell said. What fills his mornings with worry is how to make sure those physicists have an IT environment capable of crunching through the amount of data required to answer questions of that magnitude.