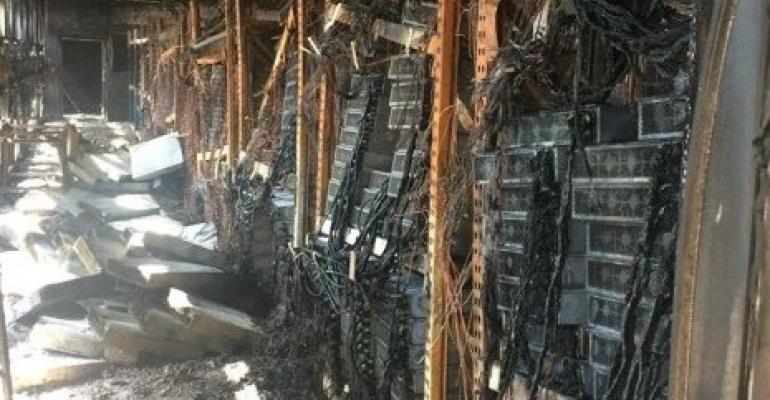 Photo of the devastation being circulated on social media (Reddit, BitcoinTalk)
Business

Fire at Bitcoin Mine Destroys Equipment

A fire in a warehouse-style facility in Thailand has destroyed hundreds of bitcoin mining rigs, whose value may run into the millions of dollars, according to accounts on foreign press and social networks.

Reports of a fire in a warehouse-style facility in Thailand have raised tough questions about the wisdom of hosting expensive bitcoin mining equipment in low-cost warehouse facilities.

Reports on foreign press and social networks suggest the fire last month may have destroyed hundreds of bitcoin mining rigs, with estimates of their value running into the hundreds of thousands and even millions of dollars. The fire illustrates the risks of operating high-density computing gear in low-tech environments, and underscores the value of data centers that offer advanced electrical infrastructure and fire suppression systems.

In postings on BitcoinTalk, officials from Spondoolies Tech said the cause of the fire is unknown, no one was hurt and that they believe the equipment was uninsured. The company said the "buildup was definitely not according to U.S. electric code." Some commentators on social media speculated that electrical and network cabling may have been an issue, and photos of the facility show tangles of cabling.

The bitcoin network infrastructure is split between data centers and no-frills hashing centers featuring high-density hardware and low-reliability power infrastructure, often housed in former warehouses. Many bitcoin entrepreneurs focus on building high-powered infrastructure at the cheapest price point possible. As industrial mining operations scale up, they are optimized for rapid changes in hardware and economics.

But there are tradeoffs that accompany this single-minded focus on cost. Data center veteran Mark MacAuley has been publicly warning about the potential for this type of incident in low-budget mining facilities. "The nuances between a mining facility and a data center are more obvious than I thought," Macauley tweeted in September. "A data center cares if there is a fire, for example." MacAuley warned that the design of some bitcoin mines created the potential for fires.

When a fire occurs, data centers use several methodologies to extinguish the fire. These include "pre-action" sprinkler system in which water fills the sprinkler pipes only upon an alarm, reducing the potential that leaks in overhead pipes will cause water damage. Some data center forego water altogether, using gas-based fire prevention and "clean agents" – electrically non-conductive gases that don’t leave a residue. Most clean agents are hydrofluorocarbons (HFC), which lack the ozone-depleting characteristics of chlorofluorocarbons (CFCs) like Halon gas, which was once popular in data centers.

Will this incident prompt more bitcoin miners to consider hosting equipment in traditional data centers? It's too early to say. Recent declines in the price of bitcoin have further tightened profit margins for miners. To remain competitive, industrial mining operations are making large investments in new hardware. Many businesses would seek to protect these investments with business insurance, but insurers will likely to want the equipment to be hosted in facilities with proper fire detection and suppression equipment.