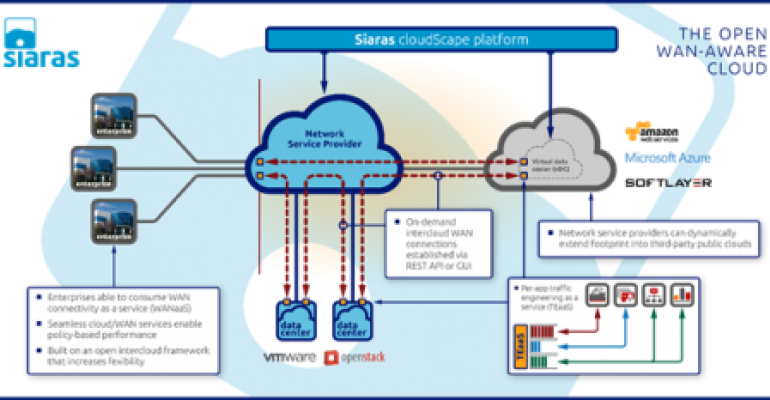 Siaras is a new company focused on integrating clouds with Wide Area Networks (WANs). Its cloudScape platform is targeted at service providers, enabling them to sell WAN on demand as a service -- in similar fashion to cloud services.

Enterprises are increasingly leveraging multiple clouds in their deployments. The problem is that these clouds don't talk to one another easily, making WAN provisioning a bigger task. Applications are driving WAN requirements, but WAN isn't as flexible as cloud, which makes it a bottleneck for multi-cloud apps.

Cloud is available on demand while WAN often takes longer to set up and requires long-term contracts. Siaras believes that network service providers are in the position to address this by offering what it calls “WAN-aware cloud.” cloudScape helps service providers orchestrate the WAN between clouds.

It is a proprietary platform based on OpenStack, which extends its network control capabilities. The platform helps a service provider create a logical network from data center to data center, including clouds like Amazon Web Services.

Siaras CEO Vivek Ragavan said enterprises face two radically dissimilar worlds with cloud and WAN. “The service provider is in position to understand both WAN and cloud and resolve the discrepancy,” he said.

The WAN-aware cloud sits atop of other clouds and acts as what CTO and co-founder Sig Luft calls an “orchestrator of orchestrators.”

The two current approaches enterprises use with cloud are either trusting the public Internet or setting up direct links to popular public clouds like AWS, Azure, and Google Cloud Platform through colocation providers.

“There are several cloud orchestration platforms, but WAN orchestration, which has been around longer, is less advanced," said Luft. "These services haven’t been sold on demand yet.”

Siaras believes this is a differentiator and opportunity for service providers to raise flat network revenue streams. The company also hopes to generally extend OpenStack’s ability to accommodate intercloud WANs and has been a contributor to elements of the open source project that have to do with the network.

In cloudScape, endpoints determine the sharing of constrained WAN resources. It can talk to other systems not dealing with WAN and it can interconnect them through similar or different clouds.