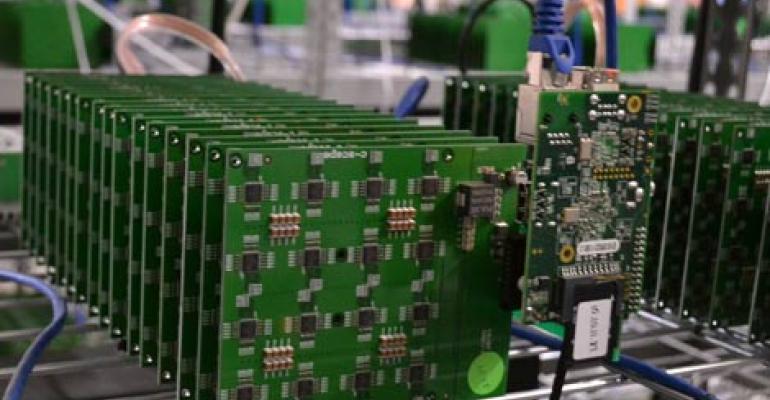 Region emerges as vibrant part of the global mining network as operators follow in the footsteps of the cloud industry.

As the bitcoin computing network expands, it is growing in the footsteps of the cloud computing industry. Locations with cheap land and power are attracting large bitcoin mines, which are often deployed near major cloud data centers, and sometimes inside their data halls.

A case in point: Central Washington state. Bitcoin ASIC Hosting said it is planning to build out 2.5 megawatts of data center capacity in the Wenatchee area, adding to an existing 1 megawatt of colocation space for bitcoin mining customers. And it's not alone. MegaBigPower, which operates one of North America's largest bitcoin mining operations, is planning a major expansion that could add more than 20 megawatts of capacity in Central Washington. Seattle-based HashPlex has also announced plans to deploy capacity in that part of the state.

Bitcoin ASIC Hosting already hosts some customers in leased space in a Dell data center in Quincy, the small farming community in Grant County that has emerged as a magnet for cloud computing infrastructure.

Microsoft and Yahoo have built some of the world's most advanced data centers in Quincy, which is also home to data centers for Intuit, Sabey Data Centers, and Vantage Data Centers. The region is now emerging as a hotbed of activity for bitcoin hashing centers filled with high-density servers crunching transaction data. The growth of the two industries in Central Washington demonstrates how bitcoin entrepreneurs can benefit from piggybacking on cloud growth.

The lure of cheap, clean power

Why are these power-hungry server farms flocking to Central Washington? The region's supply of cheap hydropower from dams along the Columbia River is the key to its appeal. Rates for hydro power in Quincy and Wenatchee can run as low as 3 cents per kilowatt hour, placing it among the cheapest locations in the continental U.S.

Yahoo and Microsoft each acquired land in Quincy in 2007, a time when their site selection efforts were focused on finding optimal locations for Internet-scale investments in land, power, and servers.

Affordable power was the key attraction for Bitcoin ASIC Hosting, which was launched in 2012 by Seattle-area bitcoin entrepreneurs Allen Oh and Lauren Miehe. They got into the cryptocurrency game by running mining rigs in their homes and garages, but saw an opportunity to build a business offering data center space optimized for virtual currency miners.

"It was amazing to learn that we lived an hour from the place with the cheapest power prices in the country," said Oh. "We felt like we’d won the lottery. We were among the first ones to go out there and lease space. We’ve helped cultivate some positive experience with the PUD (public utility district) and contractors. Being there and shaking hands is important."

Dave Carlson, who runs MegaBigPower, was another Seattle-based entrepreneur who has focused his operations in Central Washington.

"Someone in the industry tipped me off to the extremely cheap power and real estate in Central Washington," said Carlson. "That was all it took for me to realize I had a significant business opportunity. But it wasn’t easy at all. The difficulty at the time was that if anyone had heard anything about bitcoin, it was probably only bad things. I really had to work hard to find a landlord to make the system work."

Carlson set up a mining facility in a warehouse near Wenatchee in July of 2013. His operation has grown to 5,000 square feet and more than 3 megawatts of power. There's plenty more in the pipeline, as MegaBigPower is preparing several new facilities in its Central Washington operations, including a 23 megawatt hashing center and another site that could support 12 megawatts.

Carlson also quickly learned the importance of strong relationships with the local utility. "It became fairly capital-intensive to build out the power," he said. "I had to work with the local PUD to bring in as much power as they could manage. It was a fresh build." The expansion required new transmission lines, new poles, two large transformers, and trenches to the building.

Carlson said the utility districts were familiar with data centers, but bitcoin was new territory. "They have realized that it’s for real."

"The PUDs get a ton of calls," said Oh. "Last year it was once a week. Now they're being flooded with calls seeking detailed power information. I think they’re a little more reserved about who they talk with, given the low hit rate (of actual customers)."

The bitcoin network infrastructure is split between data centers and no-frills hashing centers featuring high-density hardware and low-reliability power infrastructure, often housed in former warehouses. Both types of facilities can be found in Central Washington.

MegaBigPower follows the hashing center design model. Carlson has built out his mining rigs in former warehouses, using commercial shelving and keeping his mining gear cool with large fans that were originally used in the dairy industry. "The only thing we borrowed from data centers was the power distribution and using rack PDUs," said Carlson.

Bitcoin ASIC Hosting goes with a traditional data center approach, using raised floors, with UPS and generators for backup power. "We want to scale up and provide capacity, but we also want to operate at a standard where we could pivot to hosting other kinds of hardware," said Oh. "Just like the bitcoin market, the colo market is going to be volatile."

While other bitcoin firms have expressed interest in expanding in Central Washington to tap its cheap hydro power, Oh said being an early follower of the cloud pioneers has positioned his company for success.

"Word is getting out, and it's raising the profile of this area," said Oh. "It helps to have connections. Local officials really do appreciate those who are serious about it."