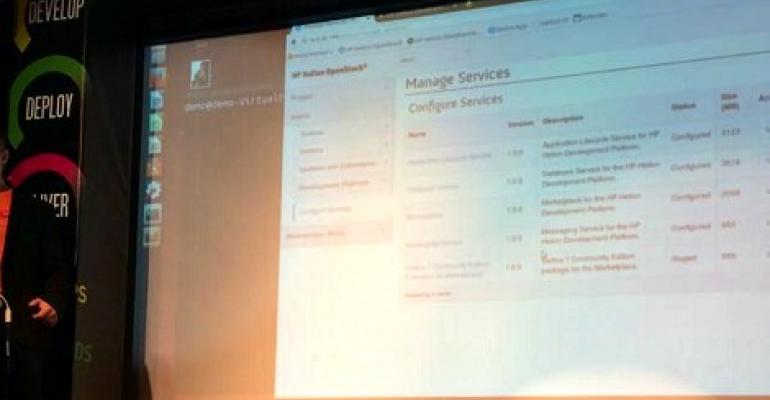 HP releases its commercial version of HP Helion, its OpenStack-based cloud platform, along with the HP Helion Development Platform, a fully integrated development environment based on Cloud Foundry technology.

HP has now publicly released its commercial version of HP Helion, its OpenStack-based cloud platform, along with the HP Helion Development Platform, a fully integrated development environment based on Cloud Foundry technology.

Announced Thursday, this is a major milestone for HP, which first announced its HP Helion portfolio in May 2014 along with a plan to invest more than $1 billion over the next two years on cloud-related products, services, marketing and R&D.

Previously, Helion OpenStack had been available as a preview, and, with the general release, HP is now confident that it’s a hardened and commercial-grade deployment of OpenStack.

Helion offers an integrated IaaS and PaaS solution, and the Helion Development Platform provides a simple way for developers to build cloud-native applications using a wide range of programming languages including Java, Ruby, Node.js, PHP, Python and Perl as well as various application services. And it supports Docker containers so that developers can create easily deployable and portable applications.

HP is also rolling out a few optimized solutions which are integrated with Helion software, HP server and storage hardware, and its managed services.

HP has been in the midst of a major identity change, having recently announced that it would split into two companies with one basically focusing on printing, and the other focusing on enterprise hardware, software and services.

HP has also been making major strides in the open-source world with the introduction of a hardware-agnostic cloud service provider network, and the purchase of cloud startup Eucalyptus Systems whose software helps make hybrid cloud solutions that are compatible with Amazon’s public cloud. These measures towards more interoperable cloud solutions are very much in demand from enterprise customers who do not want to be locked into a particular software and hardware stack.

ISV and SaaS solution providers can also use the HP Helion Ready and HP Helion Developer Network to develop competency around the HP Helion platform, and help them build services.

This article originally appeared at: http://www.thewhir.com/web-hosting-news/hp-rolls-openstack-based-helion-cloud-app-development-platform