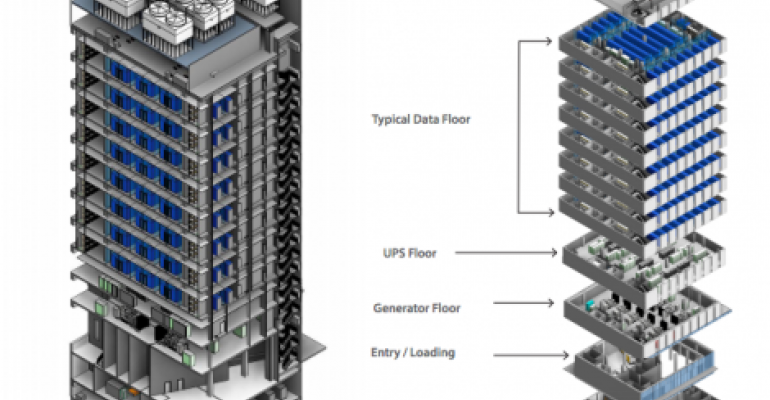 A new 12-story data center has been proposed for the Denny Triangle neighborhood of Seattle, Washington. Clise Properties and Graphite Design Group submitted data center plans to the design review board for the upcoming development. The location is close to Amazon's Rufus 2.0 campus and is currently a parking lot.

Clise is planning to recycle data center heat by piping hot air into heating systems of nearby office buildings, similar to the way Amazon is planning to use heat generated by data centers in the nearby Westin Building. Clise also developed the Westin property, which is one of the west coast’s biggest network hubs. Digital Realty Trust bought a 49-percent stake in the building in 2006, entering a joint venture with Clise.

Amazon's campus is visually distinct, with three globe-like structures. The plan is to use data center waste heat energy to heat the entire high-rise campus, which covers four blocks. Clise formed a company called Eco District together with McKinstry to design and built the system.

Exhaust air from server farms can reach temperatures above 100 F. That heat is normally wasted and undesired. In the proposed data center waste heat recycling system, that heat is piped into office buildings, putting it to use and cutting heating bills.

Multiple companies have undertaken data center waste heat recycling projects, including Telecity and IBM, doing it in a variety of ways. A partial list is available here.

Seattle has a thriving high-tech industry. Being a birthplace of Amazon and Microsoft, the area played a crucial role in the advent of cloud services. The proposed data center has a rich ecosystem of tech companies to tap as potential residents. Despite being in early design stages, Clise Properties President and Chief Operating Officer Richard Stevenson told Puget Sound Business Journal that there is already significant interest from potential future residents.

The data center is planned for the corner of Sixth Avenue and Bell Street at 2229 6th Avenue, according to public records. It is southeast of Seattle Center, a 74-acre park, arts and entertainment center originally built for the 1962 World’s Fair.