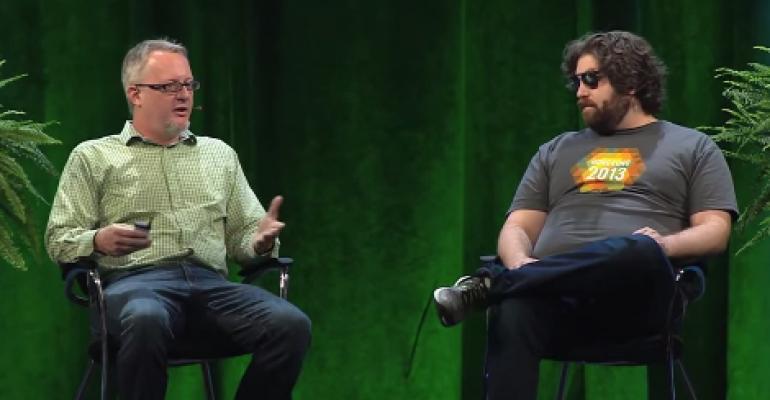 OpenStack Foundation COO Mark Collier and Guillaume Aubuchon, CTO of DigitalFilm Tree, do their version of Zach Galifianakis’ online interview series Between Two Ferns on stage at the OpenStack Summit in Atlanta in May. (Source: YouTube video of the presentation)
Business

Now in its fourth year, OpenStack has become the go-to software suite for anyone wanting to stand up a cloud environment outside of an Amazon, a Microsoft or a Google data center. Legacy IT vendors have based their cloud strategies on the open source architecture, and countless startups have devised entire business models around it.

Juno, release number 10 of the suite, is coming out this week. OpenStack Foundation leaders gave Data Center Knowledge a preview of some of the key improvements.

You could use OpenStack together with big data processing frameworks, such as Apache Hadoop and Spark, before, but you’d have to roll up your sleeves and do all the integration work manually. That changes with OpenStack Juno, which introduces a new “data processing” interface for these frameworks.

“This data processing part of OpenStack takes a little bit of pain and management out of that,” Mark Collier, chief operating officer of the OpenStack Foundation, said. “It shows up in the dashboard as a data processing tab.”

You can select a Hadoop distribution of your choice, for example, and create templates for different compute cluster configurations, assign worker and control nodes and so on. It will be up to distribution providers to create plug-ins for this feature in OpenStack. Hortonworks is among distros that already have one, Collier said. “I would expect we’ll see additional types of frameworks in the future.”

OpenStack will disrupt the telcos (in a good way)

OpenStack has made an immeasurable impact on the cloud service provider market. All of a sudden, companies with zero or very little cloud infrastructure experience could stand up private clouds for customers or public clouds of their own to act as service providers. It has shaved off some of the technological edge proprietary cloud operators like Amazon, Microsoft and Google have had.

But there is another sector OpenStack is quietly disrupting – the telcos. Pretty much every major telco has been actively participating in the various open source development projects that make up the OpenStack movement, Collier said. They include AT&T, Telefonica, Verizon, Orange, NTT and their peers.

For them, OpenStack is an opportunity to rid themselves of having to spend tons of cash on expensive proprietary network management technology they buy from the incumbent vendors. Over time, they hope to be able to buy commodity off-the-shelf server hardware and use open source software to manage traffic on their networks. OpenStack is one component of that vision.

“It’s not something that is going to be widely deployed across all of their networks in short period of time, but that’s where they’re headed,” Colliers said.

This effort is still in its early stages, today focused primarily on improving reliability of the hardware orchestrated by OpenStack. With millions of subscribers, carriers require “a level of engineering precision that maybe isn’t needed for a traditional workload in the cloud,” Collier said. Juno is a more reliable release of OpenStack, and the telco effort deserves a lot of the credit for that.

Swift brought the reliable low-cost object storage technology to OpenStack in 2010. It automatically stores multiple copies of an object across multiple inexpensive hardware boxes, so “you can have a lot of hardware failure and still recover the files,” Collier said.

With OpenStack Juno, Swift has gotten smarter about how it does its job, however. With new tiering capabilities, a user can be selective about the amount of copies that are made for each object and where those copies are stored. A less critical piece of data, for example, can be copied once and stored on a low-performance box, while an important object that is frequently accessed by applications will be replicated many times, stored on flash, and its copies will be distributed across multiple geographic locations.

Tiering has been part of Cinder, the block storage component of OpenStack, for about a year and now comes to object storage as well.

Cinder has been enhanced in the latest release too. There are 10 additional drivers for block storage systems in Juno, including drivers by Fujitsu, FusionIO, Hitachi, Huawei and EMC, among others.

A lot of work has gone into improving Neutron, the portion of OpenStack created for advanced software-defined networking capabilities, Collier said. You can now use Neutron to implement more traditional network models, which makes it easier to migrate your network from Nova (the original network component of OpenStack) to Neutron and start using those advanced SDN features.

There are now more SDN plug-ins for Neutron and those plug-ins have been tested for reliability. In fact, all new drivers written for OpenStack are more reliable thanks to a new testing system that has been implemented. “For each of those drivers to be include in the release they have to be passing a set of automated tests,” Jonathan Bryce, executive director of the OpenStack Foundation, said.

There are about 35 Neutron plug-ins now, including new ones by IBM, Mellanox, Juniper and Brocade, among others. All of them have passed testing environments hosted by the vendors themselves and also a central testing environment operated by the OpenStack community. The system is essentially a globally distributed testing lab that feeds data into development servers, Bryce explained.